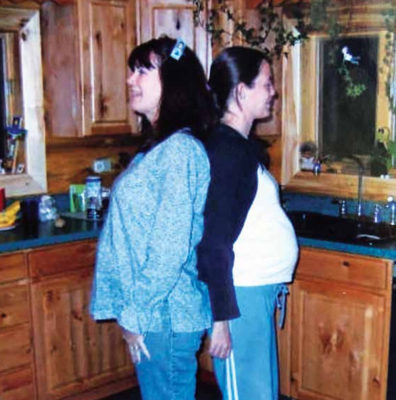 As any woman with children can attest, announcing your first pregnancy to your mother can be a nerve-racking experience. Twenty-three-year-old Montana native Marisa Weppner was living in Costa Rica and had recently learned she was expecting a baby. The time had come for a phone call to break the good news to her mom, Joan Hendrickson. The call was fun, and scary, and wonderful, Marisa recalled.

Joan remembers the conversation well – it was around Christmastime, and she was in the middle of a move from Poplar to Sheridan. She sensed her daughter’s apprehension and excitement over the phone, assuring all would be well for the new mother-to-be.

As it turned out, Joan had some big news as well – she just didn’t know it yet. Flash-forward a few weeks to another surprise call. This time it was Joan’s turn to surprise Marisa – Joan, 44, had discovered she was expecting a baby as well. “And that was a surprise, for all of us,” said Smith, chuckling at the memory. “I said ‘Mom, this is your seventh child, I feel like you should know how this goes!’”

Joan explained that she hadn’t even considered pregnancy as a possibility at the time, but when all the signs started flashing, she took a pregnancy test. It was positive – she was expecting, and hesitant to tell Marisa as she didn’t want to steal her first-pregnancy limelight. “Here, I show up,” laughed Joan.

Marisa returned to Montana from Costa Rica when she was around six months pregnant to finish out her pregnancy in Sheridan. “I wanted to spend the rest of the pregnancy with my mom, because, you know, how unique, and fun, and great was that?” she said. “It was such a wonderful opportunity to do something so different, when you can be pregnant with your mom.”

The big-bellied mother and daughter duo turned heads around town, with many assuming they were sisters. “It was weird and funny and awkward when we explained it,” recalled Marisa. Joan would agree, “But it was such a special time, and we had so much fun,” she said of the joys of sharing pregnancy with her daughter.

Marisa’s due date was in early October and Joan’s was sometime a little after that. As their due dates approached both women were more than ready to meet their little bundles of joy. Hoping to speed up the process, they’d head out for drives on bumpy roads and go for jogs. It must have worked – Joan ended up going into labor on September 6.

Marisa tagged along to the hospital in Dillon, not wanting to miss the birth of her brother. The labor was going along well, so Marisa along with her partner and her mother’s partner headed out for some Chinese food. Upon returning to the hospital Marisa started to feel a bit sick but chalked it up to a bellyache from some bad Chinese food.

At that time Dillon’s hospital had two birthing rooms. While her mother labored next door, Marisa took a load off in the second birthing room, hoping to ease her bad belly. Lying alone in the small room, feeling uncomfortable, Marisa rolled over on the bed, bemoaning her condition.

That’s when her water broke. “I was like, oh my God, this is happening,” said Marisa, recalling her next steps which were to go next door to tell her mother that she would unexpectedly be joining her in the joys of labor.

Upon that announcement the nurse’s eyes got huge and her jaws dropped – Joan had just started to push.

“I’ll never forget the look on the nurse’s face,” said Joan, “It was just like, ‘What do you want me to do with this information?’”

Marisa stayed by her mother’s side, coaching her through a tough period of pushing, and her brother Morgan was born a healthy little boy in the wee hours of the morning of September 7, 2003.

It was Marisa’s turn next. She’d come to the hospital with no idea she’d be giving birth so soon, and stayed at the hospital through her 15-hour labor when many would have been at home packing and waiting for the right time to head to the doctor. It was hard, as labor tends to be, but Maya was born that evening at 7:30 p.m.

The world’s newest members, Maya and Morgan, were born uncle and niece, on the same day, in the same hospital, in rooms right next to each other. The two, twin spirits if you will, would spend many more moments together as they grew.

Marisa moved into an apartment at her mother’s place after the birth. She and Joan raised the new babies together – it was an experience both look back at fondly. As a new mother Marisa found priceless help from her mother who was now raising her seventh child. They cared for the babies together. “It was just wonderful,” said Marisa of those early days working as a team.

Joan fondly recalls the young ones, the “twinettes,” growing up alongside each other. Morgan and Maya soon became the best of friends. Unlike many sibling relationships where competitions for mom’s attention crop up, the two children each had their own mommas – full, loving attention all the time, as well as each other’s company.

Marisa and Maya lived at Joan’s place for nearly three years before relocating to other parts of Madison County. In 2008 Marisa and Maya moved out of state, but the Maya and Morgan, now 17, remain close to this day. Maya calls Morgan her “twinkle,” AKA twin uncle. They still spend their birthday together, and even went to Burning Man for their 15th birthday, their mothers along for the experience, of course.

“I can see that they just love each other so much,” said Marisa of Maya and Morgan’s unique bond. “There’s a deep comfort, knowing and ease that they have with each other, like a favorite blanket.”