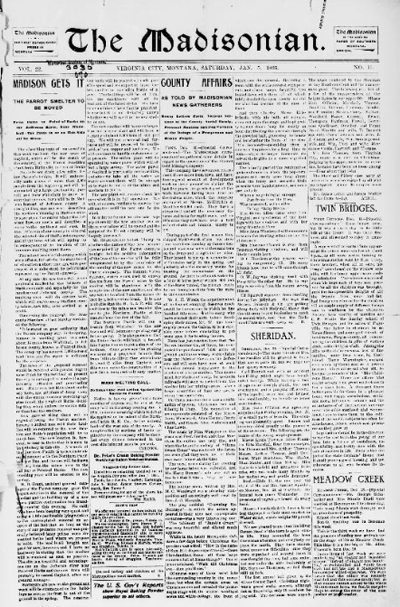 Based in Virginia City, The Madisonian is the oldest weekly newspaper in Montana, published continuously since 1873. In 1894, William W. Cheely bought the five-column, ten-page paper, after having worked as a printer on the Anaconda Standard and as a reporter for the Butte Miner, the latter owned by the copper king, William A. Clark. Cheely came to Montana from a Colorado mining town in 1890. He achieved a position of leadership in the Montana Press Association, initiating the publication from the 1910s to the 1940s of the Montana News Association insert, a four-to-six-page supplement to weekly Montana newspapers focusing on local and state history.

During the first couple of months of Cheely's tenure at The Madisonian, the story of the Northern Pacific Railroad's controversial attempt to file on local mineral claims dominated its front pages. The newspaper also published a column entitled, "All Over the County: The Week's Record of the Doings of a Prosperous and Happy People," which featured regular reports from the towns of Sheridan, Twin Bridges, Meadow Creek, Laurin, and Ennis. As mining constituted a major facet of the local economy, The Madisonian regularly reported on current mining activity, especially dredge mining, which revived gold mining in Madison County between 1895 and 1920.