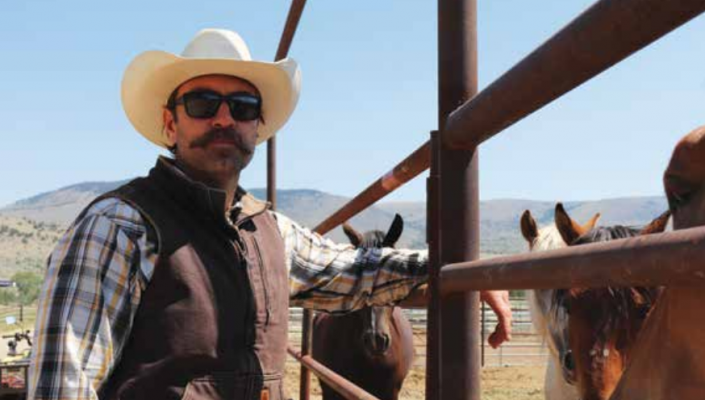 Treating the mind, body and spirit

Heroes & Horses aids veterans in their transformation back to civilian life

Where were you when the 911 attacks occurred? It’s a question many of us have asked and answered; an event of such magnitude is sure to be burned into memories for a lifetime.

For Micah Fink, the unfathomable event was more than just a brief recollection of location and reaction to the terrorist attacks – he experienced it firsthand. Fink was working on a telephone pole in Queens when the first plane hit the World Trade Center. He saw a deceased police officer; a mangled torso.

Entering the military had never crossed Fink’s mind, but seeing the horror unfold in New York City inspired him to join the Navy where he became a Seal and paramilitary contractor. Upon his completion of service, Fink, like so many other combat veterans, was faced with the daunting task of re-assimilating to civilian society.

The statistics, ask Fink laid out, are gut-wrenching: every 64 minutes a veteran commits suicide. That amounts to 155,000 veteran suicide deaths between 2005 and the end of 2020; a staggering number when it’s compared to the 7,000 vets killed in the global war on terrorism.

Now into 2021, Fink said the statistics are getting worse with veteran suicide rates at around 24 deaths per day. But what can be done? In addition to government Veterans Affairs programs around 50,000 non-profits exist in North America with aims to address veterans’ unique needs. Many are diagnosed with Post Traumatic Stress Syndrome and prescribed medications to help with mental health. Yet, the rise in suicides continues. The bleak scenario left Fink wondering, what could he provide that could be more effective?

“What I realized in my own personal journey was that we were obviously helping people to death, and it wasn’t even necessarily a resource issue,” said Fink, citing that between 2012-2020 $92 billion was spent on veteran assistance.

“That’s the cost of war, it’s happening because young men and women from our nation join up, and they enter into a program that takes your hair away, takes your car away, takes your friends away, your money, your language,” said Fink, “It takes everything you know away from you, and then it programs you. And so, when you get out, that program doesn’t work here, we’re masters at turning civilians into soldiers, but we fundamentally fail at turning soldiers back into civilians.”

Enter Heroes and Horses. Fink, not wanting his life to end in that scenario, started the nonprofit after discharge in 2014. The 41-day program invited veterans to try a whole new, immersive experience without the use of psychotherapy, medications and government programs. The focus, said Fink, is treating more than just the mind by helping the vets to understand who they really are through new experiences, hard work and challenges.

“You overcome external circumstances by understanding who you are and using that knowledge to move forward,” Fink explained. Getting vets to that place, however, doesn’t happen in a day. In the case of Heroes and Horses, it’s a transformative experience in which students leave with a master’s degree in themselves, in a continual conversation of, who am I, other than a veteran?

Veterans who are accepted into the all-expense-paid Heroes and Horses program have their work cut out for them – it’s a 4:30 a.m., rise and shine before the sun, no days off type of schedule. The students’ camp is about a mile from the main facility, there’s no electricity, cell service or running water. Every morning involves a mile trek to mobility training followed cold-water immersion breathing exercises and meditation.

Morning mind and body exercises, check. Nutrition, check. Then, it’s all about the horses.

“Horses are a mirror reflection of who we are,” said Fink, explaining why he chose to work with the animals, he describes as a potent teacher of human beings. “They’re not intelligent creatures, but instinctually, they’re genius… they’re very honest creatures, and everything that they’re doing is very intuitive. Horses are a mirror reflection of the soul.”

Around 75 horses, more than half once wild mustangs, are located and trained on the ranch. The average student has little to no horse knowledge, but by the end of the experience, they’ll have ridden between 400 and 500 miles, gathering knowledge ranging from philosophy to shoeing, roping, veterinary medicine and maneuvering trucks and trailers. The list goes on.

That endless supply of knowledge in hand, the second half of the journey involves spending 22 days in the wilderness, each with their own horse and mule.

Once that’s accomplished the students end their Montana experience in a Lakota sweat lodge purification ceremony before embarking on internships located around the country. The year-long course continues with reading lists and diet and workout plans as well as follow-ups with a mindset coach on the goals they’ve set while here.

For seven years Heroes and Horses didn’t have a true home base – programs were offered at leased and borrowed locales that changed year-to-year. That all changed recently when Fink was contacted by a landowner outside of Nevada City who offered to sell him a 3,500-acre ranch. Funds were a bit short to say the least, but supporters of the organization stepped up and made it happen.

This will be the first summer on the new ranch, where one eight-person class just came to completion. On July 14 a second group of eight students was out in the wilderness of the Beartooth mountains, and Fink was readying to join them soon.

“We’re excited to be here in the community, and I recognize that we are stewards of the land,” said Fink, who plans to naturally address noxious weed issues, restore natural grasses, and build an arena that will be available for local youth rodeo to utilize. Members of the community are also invited to join the effort.

“We hope to involve the local community as much as we can,” said Fink. “Our doors are open, and we want to get involved, to have people come bring knowledge to these guys, as they take those steps forward as they leave old identities and experiences behind and begin a new life.”

Plans are in place to build a small ranch house, a community development center for the sauna, cold plunge, meditation room and gym, as well as a bunkhouse for volunteers: for every Heroes staff member there are 14 volunteers that come from around the country to assist.

As Fink and his COO Mark Davis discussed the philosophy and challenges of measuring success for the Heroes and Horses program, former student and now staff member Colton Osland was busy in the temporary kitchen frying up some steak for lunch. Osland said it was his ex-wife that cajoled him to sign up, though he was hesitant at first since he had no interest in the ranching lifestyle. He’d received a four-year degree in computer science after getting out of the army, and Heroes and Horses didn’t seem like a fit.

Osland’s ex-wife filled out some of the lengthy application, he finished the process, and lo and behold, he was accepted.

“I came out, and I absolutely hated it,” he said. “I’d never touched a horse in my life, didn’t believe in what the teachers were saying, and just came out because my ex wanted me to, to get the right answers and come back home.”

But time in the backcountry and a conversation with Fink changed all that, and when Osland returned home to Washington he quit his job, found a job with horses, and eventually took a position working in Yellowstone National Park.

Last year Fink and Davis reached out to see if Osland was interested in working for Heroes as they begin their new chapter on the ranch. He did.

“It’s been very eye-opening for me,” Osland said, noting the challenges of being told by the VA that you have PTSD, and dealing with a society that tends to treat veterans differently. With Heroes, he said, students are thrown into the mix, onto a horse, and into the backcountry.

“It’s a program that works, it’s very different than other programs that some of my buddies have done,” said Osland. “We get these guys out here, stress them out, make them do hard work, and the ones that stick with it thrive.”