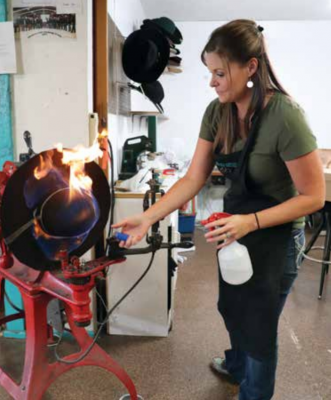 Tip of the hat

Growing up watching her mother Sheila make cowboy hats, Ericka Kirkpatrick certainly learned a lot about the unique trade. She’d help with all the aspects of the trade, but she was sure it wasn’t something she’d take on as her own career.

Nevertheless, in 2017 Ericka took the reins of Montana Mad Hatters when Sheila retired from the trade, continuing the Twin Bridges family business that has kept many a head covered in handmade hats that undoubtedly turn heads.

Montana Mad Hatters hats are made in the traditional way, using beaver fur to mold a cowboy hat fit specifically for each customer’s uniquely shaped noggin. Over the years customers of note have included George H. W. Bush, Willard Scott, Michael Keaton, Bill Pullman and others.

The mother and daughter recall when “Batman” came into the shop, “But I always say there’s nobody more famous than the local cowboy,” said Sheila. Sheila’s hat making story began when she was a young girl of nine or 10, attending rodeos with her father. Inspired by all the wellworn cowboy hats she saw, she started shaping redesigning her own in the fashion of the cowboys. Later in life she worked at a western store in Billings. While employed there she convinced the owners to purchase their hats flat-brimmed – she then shaped them, quickly becoming known as an official hat shaper.

With that experience under her belt, she went on to work for a custom hat maker for about a year. In 1983 she got married and moved to Wisdom, Mont, “A place so close to God it’s a local call,” she joked. Using money obtained from mortgaging a car she started her own hat shop, Kirkpatrick Hatters. It was there she raised Ericka alongside the hats and traditional hat making equipment.

Hat making was so engrained in Ericka’s identity, for a time she thought it was part of her name. Ericka’s nickname as a girl was Bojo – she recalls a dance recital at which she walked onto the stage to announce her name, “I went up there and said, my name is Ericka Lynn Bojo Kirkpatrick Hatters,” she recalled with a chuckle, “I curtseyed and walked off, and everybody laughed. I couldn’t figure out why, I thought it was my name.”

Sheila kept her daughter busy and “out of trouble” as she grew up, setting her up at the shop on the spinning crown renovator machine with a piece sandpaper – it’s a tedious and time-consuming task to get the felted beaver fur hats sanded, “So I couldn’t do much damage before she came and checked on me,” said Ericka, “But now, it’s probably one of the favorite parts of making them – maybe it’s a comfort thing from making them as a kid.”

Business has remained steady through the years, with the internet adding more buyers to the list. One popular style that’s been sold to customers around the world is the “Jake Herak” style, made popular by local celebrity mountain lion hunter of fame on the History Channel’s “Mountain Man” program.

The custom hats made in the same fashion hatters did a century ago have garnered the Kirkpatricks some notoriety – both women have been showcased in Western Horseman – Sheila in the mid-80’s and Ericka in 2018. People Magazine did an article on the shop that brought even more notoriety, and Sheila was even inducted into the Cowgirl Hall of Fame in 1992.

Making custom hats specific to each customer’s desires can be a challenge at times, but Sheila looks back fondly at her hat making career. “For me, the satisfaction of it is seeing somebody that puts that hat on, and they just think it belonged on their head their whole life,” she said. “And they feel good in it, and they look good in it. That’s important to me. And passing it on to my daughter is a huge thing to me.”

Ericka also shares that passion for the trade. “For me, it doesn’t ever feel like I’m going to work,” she said, admitting there are of course days where she’d rather stay in bed than make another hat. “But I genuinely like what I do. I’ve met some of the coolest people, who won’t go through town without coming by to visit. They’re friends now.”

Ericka now has kids of her own. They were recently enjoying a summer afternoon at the shop before heading down the road to the county fair, begging the question, will they someday take over where their grandmother and mother left off? Ericka wasn’t sure.

“I always said wanted nothing to do with it, that I would never be a hat maker,” she said, acknowledging that they do have a keen eye when it comes to other people’s hats. “But now look at me, I love it. You never know.”