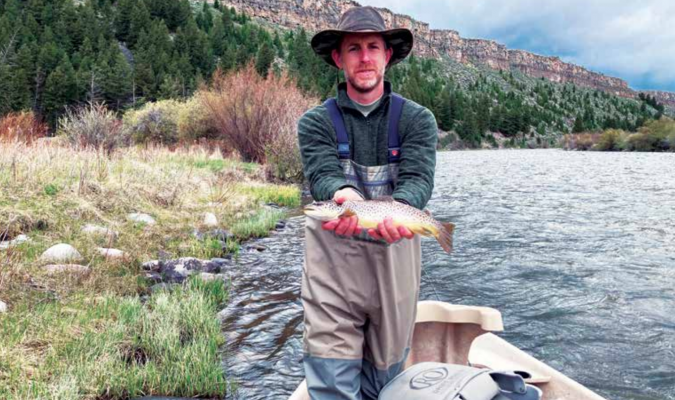 Service on the fly

Marines and family spend some time on the Madison

Wed, 06/02/2021 - 10:24am
By
Jolene Palmer
news@madisoniannews.com
“We’d talk about it on the phone, about how the Madison is so great, but they have no idea, until you actually come here, see it and float it,” said Warren Berg after the first day on the river with the Marines.

Service members were heavy on the minds of many over the last week as communities celebrated Memorial Day. Three current service members were also recently honored, in this case with a complimentary fly fishing experience at Madison Double R.

The fishing lodge’s owner, John Sampson, offered up a threenight stay for the Marines and their wives as a reprieve from the challenges working in a Marine Special Operations Battalion. A stay at the luxury lodge would be reason enough to visit Montana, but Sampson also included two days of guided fly fishing to sweeten the pot.

Before entering the world of guiding, Double R fishing guide Warren Berg was a Navy Medic with the Marines until his retirement in 2009. Earlier this year Berg invited a few of his former cohorts from the Marines to come out to experience the Montana fishing scene, and not surprisingly several took the bait.

Ultimately only three guys were able to make the trip, but with their family, pets and guides in tow it made for a small gathering to remember.

The crew’s first day on the river was a chilly one, especially considering they’d just come from 90-degree weather in the North Carolina. Floating seven-ish miles from Windy Point to Creek the fishing was good, including a few 16-inch brown trout worth writing home about. Berg said he loved having the opportunity to show the guys his neck of the woods.

“We’d talk about it on the phone, about how the Madison is so great, but they have no idea, until you actually come here, see it and float it,” said Warren after the first day on the river with the Marines.

Cozy cabins at the Double R offered a warm-up following the first day of fishing. Marine Master Sergeant DJ Fowler opted to keep on fishing, taking advantage of the practice pond just outside the main lodge. Trout leaped into the air as he explained he’d only spent a brief time in Montana prior to the trip, though his wife was already considering a move here.

Fowler will reach the 20-year mark with the Marines this October and is looking forward to retirement, and maybe even a move to Montana. “My wife has sacrificed enough for me, so I’ll follow here wherever she wants to go,” said Fowler.

May 27 marked the first day of fly-fishing ever for Fowler, though he’s familiar with coastal fishing for red drum, whiting and others. “But realistically, I don’t catch a lot, I just have an eight-year-old who is a good charm,” he explained. “He catches quite a bit of fish.”

His good luck charm was not in attendance this time, but thanks to the expertise of the guides trout were caught within minutes of leaving the launch. There were of course, some challenges. “At one point I had one, but we were convinced it was just hung up on the rocks, since I got to the backing of the rod,” recalled Fowler who caught five or six fish on his first-ever outing. “Then, the fish jumped up out of the water and off the hook, and it was still fun.”

Nearby in the Double R’s lodge Marine Gunnery Sergeant Mike Geosvweski was taking in the scenery following his also successful day on the Madison. Living on the coast in North Carolina he’s also used to fishing the coast. His first go around with fly fishing was a while back on the Bighorn River, but after his experience here he said he’s ready to buy a fly rod of his own.

“It’s a different game, it’s just peaceful,” said Geosvweski, who admittedly missed way more fish than he caught on his first day on the Madison. “But I can cast all day, it’s just about being out there. That river is amazing to say the least.”

Geosvweski’s biggest challenge on day one was just focusing on the task – the scenery kept grabbing his attention which should have been on the rod in his hands. “My guide kept telling me to set it, set it, set it, and he’d catch me slipping again,” he laughed. “It is tough.”