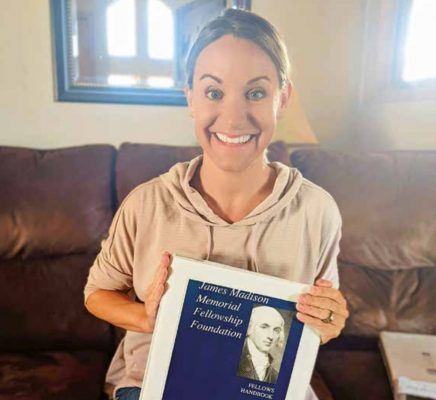 The rest is history

When an unexpected Fedex package arrived on Sheridan history teacher April Wuelfing’s doorstep recently, she didn’t think much of it. With three kids and all the online shopping being done lately, she figured it was something for the kids or her husband.

Setting the box aside to cook dinner, the package was forgotten. But later, a quick glance at the Virginia return label brought Wuelfing to the realization this wasn’t just any package – it was from the James Madison Fellowship.

Wuelfing had applied for the scholarship, which grants $24,000 to one educator per state, in March. Now that her kids were older, she figured she’d start applying this year in the hopes of starting her master’s studies someday soon. Maybe, she thought, her name would garner recognition after a few years of applications.

Turns out she stood out from the start – the unassuming package contained a binder which held a letter of acceptance and other information about the program and a directory of past Fellows.

“I was just so, so surprised,” Wuelfing recalled.

Wuelfing, who teaches 7th-12th grade social studies, government and history at Sheridan middle and high schools, will use the funds to pay for her pursuit of a master’s degree with a concentration in American constitutional history via an online program offered by Sam Houston State University. She said she is looking forward to relaying all the new knowledge she’ll receive from her master’s degree studies, not just in history but constitutional history in particular.

“Which I think with our politics and everything else being what it is, that there’s a little bit more interest in government and the constitution these days,” she said, “So I’m excited to be able to learn more to share with my students.”

The fellowship award also comes with other perks, including a month of studies next summer at Georgetown University in D.C. She’ll reside on campus with the 49 other Fellows, focusing on Constitutional studies taught by Georgetown law professors. The six credits from that experience will go towards her degree. Additionally, she’ll have a private meeting with a chief justice of the United States in the Supreme Court.

Washington, D.C. will not be much of a culture shock for Wuelfing, who graduated from University of Montana Western, and has taught in Sheridan School District since she finished student teaching there a decade ago. Each spring as part of the Close Up program she takes a group of juniors to D.C. where they spend a week learning about the government, meeting with senators and representatives and taking in the sights of D.C. This year the trip is a bit delayed, but students should be heading to D.C. in the first week of June.

History may be her true passion, but business was actually Wuelfing’s first choice when she started college in Missoula. Three semesters in she found herself waking up early, tuning in to the History Channel to catch a show long before most of her college counterparts rolled out of bed. She realized business wasn’t for her, so she set out to pursue her true love, history, by transferring to Dillon.

And as they say, the rest is history.

Wuelfling will have a full plate rather soon – three classes begin this summer: Early National American History; Texas History and Methods of History. She also has two almost four-year-old twins, a six-year-old, and a ranch to care for. “It’s going to be a lot, but I’m excited,” she said