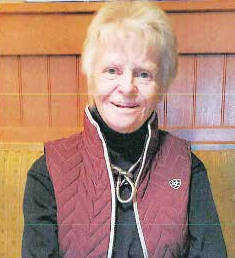 Kay Marie Cogdill Von Bergen embarked on her lifetime passion in 4-H at the age of 10 as a first year member. Throughout her time in 4-H, Kay was engaged in many activities including sewing and swine. The highlight for Kay as a 4-H member was winning grand champion Berkshire hog at the fair in Butte, with her major competitor being a young man whose family raised Berkshire hogs. She earned her 10 year ring for her years of service and achievement.

In 1966, Kay married Korky Von Bergen and soon had seven children to prepare and supervise at the upcoming Madison-Jefferson County fairs. Throughout her children’s time in 4-H, Kay could be found teaching her children and various other 4-H members throughout multiple clubs and counties in leathercraft projects, sheep, beef cattle, dairy cattle, cooking, sewing, photography and horticulture. For at least the month prior to the fair, Kay insisted on her kids practicing while she played “showmanship judge” every evening in the small pasture on the ranch for all seven of her children and any friends and neighbors who stopped by and could use practice in showing animals or breaking them to lead. Her favorite trick was to “goose” the sheep and cattle in hopes of getting them to startle so the kids would have to practice resetting their feet and keeping them from getting away. A highlight of the fair for all teenagers was looking around the fairgrounds to find Kay’s camper with the hand painted curtains and Korky’s old yellow truck with stock racks parked next to the camper. Kids would often reserve their sleeping bag spot in the old truck a year in advance to be sure they had a place to sleep or get in our of the rain during the fair. If that old truck could talk, a lot of kids today would be shocked to learn of the fun and behavior of the parents and grandparents over the years.

Kay soon became a 4-H leader and 4-H council member, where she was immediately recognized for her artistic expertise, no nonsense approach, organizational skills, ability to work with animals and provide new ideas to improve the fair. Within a few years, Kay was the Superintendent of the Poultry and Rabbit Barn and soon had more geese, ducks, chickens, peacocks, turkeys and rabbits than any small barn could hold. She was instrumental in building on to the facility in order to hold the vast number of birds it required. Many visitors to the Poultry and Rabbit Barn were amazed at the variety of poultry and rabbits. Many had never up to that point seen or heard of the breeds of chickens housed there, such as Frizzles, Cochins, Polish, Cornish Rocks, Buff Orpingtons and Wyandottes, to name a few. On one occasion, Kay was locked in the cage with the peacocks as a prank by one of the barn workers. She soon got lice from them and had to bathe in the river before going to bed that night.

In addition to making sure of her children had their 4-H projects ready and all were outfitted with white shirts, black/blue jeans, ties and new boots, she then embarked on the task of being the judge for many of the open class and 4-H projects including poultry, leathercraft, horticulture, vegetables, arts and crafts. She was selected as the poultry division judge for the Round Robin competitions. Many little ones took her hand throughout the years to proudly escort her to look at their projects and show off what they had learned from her.

Besides being a 4-H parent, council member and leader, Kay then served on the Fair Board for seven years and assisted with activities such as securing entertainment and carnival rides for the fair, approving building maintenance, securing trees and flowers for the entire fairground, planning the fair and parade, and was in charge of the rodeo for seven years. She received a plaque for 25 years of service to 4-H in 2014 and still has an opportunity to talk with many 4-H members she helped over the years and reminisce on the good times and accomplishments. She enjoyed being at the fair and working with all the kids.