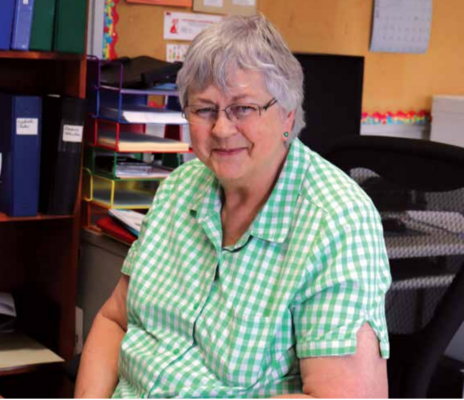 The year is 1981. Ronald Reagan is leading the country. Sandra Day has been appointed to serve as the first woman on the U.S. Supreme Court. Raiders of the Lost Ark topped the movie scene while Dynasty was all the rage on television. And in little old Harrison, Mont., Judi Ward started her career at the Harrison School District.

Ward was no stranger to the Harrison area. Her first years on Earth were spent on Sappington Ranch along the Jefferson River. She then moved to Willow Creek when she was two, starting school there. Next her family relocated to a ranch between Harrison and Cardwell, and eventually she graduated from high school in Whitehall.

“So basically, I’ve been here all my life,” explained Ward, listing off the many jobs she’s taken on in the area; working at Warm Springs State Hospital, logging, ranching, and so on.

In ’81 she successfully applied for the open secretary position at Harrison School District, a position she held for three years before taking on the role she’s held for nearly four decades as district clerk, while also holding onto her secretary duties until 1999.

So, after 40 years of wearing the many hats of a clerk – accounting, payroll, expenditure reports, taking minutes, managing activity funds (the list goes on), Ward has officially retired as district clerk. On July 7, her very last day on the job, she was cleaning out her files and training her replacement, current secretary for the district, Doreen Young. Surely a bittersweet moment, but Ward had no qualms about the decision to retire.

“I’ve really enjoyed it here,” she said, listing the other aspects of her career she appreciated, from taking on drivers ed to managing the Turner Grant which provides funding for extra opportunities to the district, guiding students with scholarship applications and opportunities.

“And et cetera,” she said, chuckling as she tried to recall all the extracurriculars she’d volunteered to take on over the years.

During basketball games she’s done the clock and books, announced, and even, as a trained singer, performed the National Anthem – acapella.

Ward affectionately calls the district’s region the “tri-city area,” referring to the close-knit communities of Norris, Harrison and Pony. Ward’s gotten to know hundreds of students and many staff members over the years, in turn guiding newcomers as they pass through the school’s corridors.

“You just learn to help people. New staff members, you help get them going. New teachers, I always tell them, on your first day of class, be tough,” said Ward. “You can always lighten up later.”

Enrollment at Harrison has fluctuated over the 40 years Ward held her post, with 85 students in grades 1-12 when she started. In the early 90’s that rose to 165 in K-12, dropping to around 68 students at its lowest. Gradually, enrollment has been on the rise, at just under 100 students currently. Out-of-district students from Whitehall, Cardwell, Three Forks, Manhattan, Belgrade and Ennis add to the mix.

“I think a lot of why kids transfer here is because we are a smaller school, they get more of that one-on-one attention, and mostly our kids are really friendly, they just accept you for who you are, it doesn’t matter if your skin color is different, they don’t care,” said Ward. “It’s who you are as a person. I’ve always liked that at this school.”

There are, of course, the troublemakers in the groups, but if kids got out of line, Ward, as she says, called them on the carpet, “And they knew, if I called them on the carpet, they’d better straighten out,” said Ward with a grin. “But the kids learned I love them, I wasn’t out to hurt them, but they were to mind. I expected more out of them than a lot of the teachers do, as an older generation.”

The district recently put on a retirement party for Ward, where staff, parents and even a few students – including one known smart aleck who jokingly told Ward he only came for the cake. Outgoing Superintendent Fred Hofman gave a speech, burgers were flipped and served, and many cards of thanks were given.

“When Fred got done, I was going to stand up and thank everybody, but I knew I would start to bawl, so I just sat there,” Ward said, recounting the party. “But was able to at least say thanks. The nice comments I received made it really special.”

So, with all this free time on her newly retired hands, just what will Ward do next? Well, she’s got two kids and a stepson, 14 grandkids and 12 great-grandkids peppered around Montana to visit. She also plans on lunch dates with friends. “And I’ve got a lot of things I’ve got to do at home,” she said, from deep cleaning to loading boxes for donation and working on picture puzzles, watching DVDs and playing computer games. She’s also taken on playing piano at the church in Harrison.

Ward said she won’t be completely out of the Harrison School scene – she plans to lend a hand at the school when needed and is looking forward to reading books to the younger kids, announcing basketball games and singing the anthem.

“I didn’t think I’d be here for 40 years when I took the job,” laughed Ward who said she’s very happy to retire from the stressful and time-consuming career, pointing out all the gray hair in jest. “But here I am, 40 years later. I enjoyed working here, but I am ready to retire.”

Superintendent Hofman, who worked with Ward for nine years, offered his thoughts on her accomplishments at the school, “Judi's retirement truly marks an end of an era,” he wrote in an email to The Madisonian. “Spending 40 years at a single employer is, frankly, unheard of in this day and age. She has worked under, or as I joked at her retirement barbeque, "trained" 10 different superintendents during her time as district clerk. Judi has not only served the students and community of Harrison, Pony and Norris for four decades, she has also served the communities in our surrounding areas as she has mentored many new district clerks. She has earned her time for rest and relaxation and I wish her the best during her retirement.”