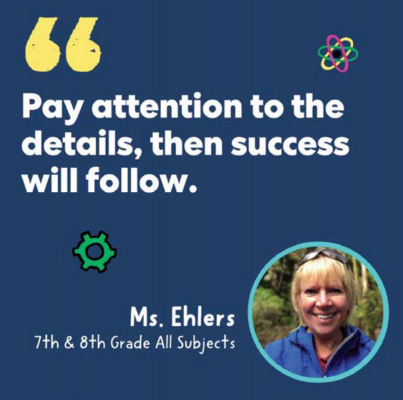 Harrison School District middle school and elementary music teacher Linda Ehlers’ email sign-off speaks to her passion for hands-on lessons in nature. It’s a quote from Jacob Bronowski, a Polish-British mathematician and historian, that goes: “It is important that students bring a certain ragamuffin, barefoot irreverence to their studies; they are not here to worship what is known, but to question it.”

That sort of educational irreverence can be seen first-hand along Highway 287 during the school year. If you’ve driven past South Willow Creek in Harrison on a school day afternoon, there’s a good chance you’ve seen Ehlers and her middle school students along the creek collecting water quality samples and studying the ever-changing flora and fauna of the waterway as part of Ehlers’ immersive Outdoor Classroom.

Like the microfauna in the creek, Ehlers’ dedication to unique, hands-on learning hasn’t unnoticed. She was recently nominated and made the cut through the Awesome Teacher Award program offered by KiwiCo, a subscription box company that provides science and art-related projects for kids of all ages.

The company received hundreds of nominations and stories about teachers who have gone above and beyond, and only five were chosen – Ehlers included.

Besides recognition for their extraordinary work, Ehlers and the four other winners will receive $2,000 worth of KiwiCo products and $500 to spend in their classroom. Ehlers said she is very much looking forward to having her students take ownership to pick out their projects in the fall and plans to use the extra $500 to cover the pricey chemicals used for water quality testing.

Trips to the creek are just one example of the unique teaching methods used by Ehlers, who has been teaching at Harrison since 1976. It wasn’t until about 20 years ago, though, when she teamed up with local author, conservationist, and Green University founder Thomas J. Elpel, that the unique methods of teaching that set her apart from the rest came alive.

That collab with Elpel ushered in a much-anticipated middle school experience where for three nights and four days at the end of each school year students and teachers immerse themselves in nature along the Jefferson River.

“I really want to promote and interest and excitement for learning,” said Ehlers, who enjoys getting outside as much as her students. “And I can do that through hands-on science.”

Highlighting an excerpt from one of Elpel’s books, Ehlers explained that most people view nature as wallpaper, rarely stepping into it, just seeing it. To her, taking her students to the creek and beyond allows them to step through the wallpaper and into the world. “I want to immerse them in that, so that they develop almost an emotional connection,” she said. “It means something to them.”

Lessons and skills learned at the Outdoor Classroom range from year to year, with focuses on birds and plants to Lewis and Clark, making bow and arrows out of willow, fire starting as a hunting survival skill, cooking dinner steam pit and bread in a rock oven. After 20 years, the list is seemingly endless.

This year, among many other things, the students learned about paying attention to detail; moving silently though the forest in an effort to observe wildlife as close as possible without as little disturbance as possible.

Ehlers admitted that, while she’s an outdoor gal by nature, when Elpel reached out to her about bringing middle schoolers out for a multi-night wilderness class, she was hesitant at first. “To take teenagers out there, someone else’s kids, it was intimidating,” Ehlers recalled. “I was way out of my comfort zone.”

But Elpel was motivated had the plans all laid out, assisting along the way to create a unique learning experience that students begin to discuss on the first day of class each year. Former students, now adults, still run into Mrs. Ehlers and immediately ask her about the latest camp out plans.

The camp out, in all its 20 years, has never been cancelled, said Ehlers, “It’s a matter of pride of survival, we’ve had blizzards, we’ve had rain, six inches of snow, we’ve had it all.”

Winning the Awesome Teacher Award came as a surprise to Ehlers, who often receives nature-related gifts from her elementary students including nests, bugs and rocks. She recalls receiving an email with information about it, but assumed it was spam of some sort. But when KiwiCo reached out again, she realized she ought to read the message, notifying her of the special recognition.

“What makes me really happy about it is the opportunity for the kids, because it’s all handson projects,” said Ehlers, who anticipates having some projects for her music students as well. “And, the $500 in cash. Now, we can order some more dissolved oxygen reagent for creek testing. I was so happy.”