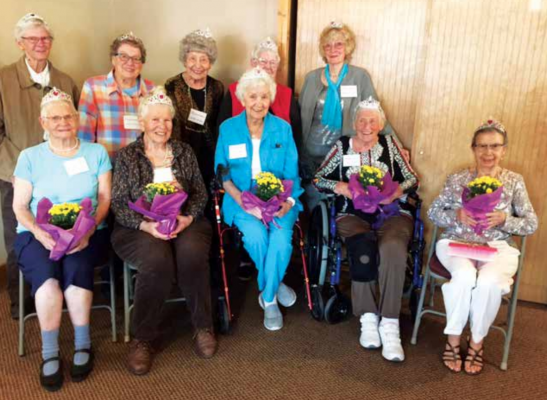 Wed, 06/30/2021 - 1:04pm
By
Keely Larson
connect@madisoniannews.com
“I have made so many good friends, met so many lovely ladies and many of them are really good friends. I’m really passionate about our woman’s club and how the community helps us by donating such wonderful items for our Nearly New and the monies that we take in, we give back to the community,” Mary Sedwick said.

Shirley Storey Masson’s dad did not believe in educating girls. Women were meant to be wives and mothers and consequently, homemakers.

To combat that, Storey-Masson worked through high school and saved every penny. She had to get out of Charlo.

In 1951, a year after she attended Girls State as a junior—a girls-only look into democracy and our government—Storey-Masson was offered a scholarship—for either $50 or $100, she can’t completely remember—from a woman’s club in Charlo.

“I remember it was a big deal to get that scholarship because I wasn’t Valedictorian or anything,” Storey-Masson said.

Looking back, she figured teaching school—at the Western Montana College of Education, now the University of Montana Western in Dillion—cost about $2,000, total. She took that money she made in high school and the scholarship from the woman’s club and borrowed $1,800 from her parents, that she paid back in her first year. And she worked in the dining hall through her two years of continued education.

After all that, Storey-Masson came to Ennis in 1953, taught for years and never left.

That snapshot of Storey-Masson’s life encapsulates the purpose of the Madison Valley Woman’s Club (MVWC). The focus of the woman’s club in its earlier years was to provide means to meet educational ends for women and transitioned to being an artery of support for the Ennis, Madison Valley and greater Montanan communities. At the same time, the club connects women across the Madison Valley, providing comradery and friendship since the early 1900s.

“If you really think about it, 100 years ago that would be, for women who lived in this valley and did not see each other very often…It was an opportunity to get together,” Cynthia Quirk, current MVWC president, said. MVWC began in 1920 and joined the General Federation of Women’s Clubs (GFWC) in 1921. The woman’s club in Charlo, that Storey-Masson received her scholarship from, also was eventually federated.

This year during the Ennis Fourth of July Parade, the ladies of the Madison Valley Woman’s Club will walk as the Grand Marshalls. They were meant to last year, the 100th anniversary of MVWC, but of course, Covid intervened. However, this year adds a second and third anniversary on the dot and a fourth the women are choosing to recognize a year postponed as well.

“Our idea for the parade, and we were going to do this last year, but we are planning on doing it this year—not only are we celebrating our MVWC, but we’re planning to wear white to also honor the passage of the 19th amendment,” Mary Sedwick, former MVWC president, explained. The 19th amendment, which deemed that the right to vote should not be based on sex, was passed in 1920.

GFWC has a political arm that takes the woman’s perspective on issues and promotes what women would like to see happen at a national level. Sedwick said the whole thing was started by a woman advocating for women’s right to vote which, “Took unfortunately a long, long time,” she said.

As the umbrella, founded in 1890, GFWC is the largest nonpartisan, nondenominational women’s club volunteer organization in the nation. The second World War provided the impetus for more women’s clubs to form as the need for volunteers arose. MVWC was one of those clubs that shed its former title of ‘Priscilla Embroidery Club’ and started working with the Red Cross. The early woman’s club boasts now well-known names like Winifred Jeffers’ mother, Jennie Chowning, and Frances Womack. In fact, many street names in Ennis are named after former woman’s club members. Old meeting minutes, that MVWC members read through when they were more readily able to have monthly meetings, noted ladies like Ms. Armitage, Jeffers, Comley and Chowning receiving streets named after them.

This early club also placed great emphasis on raising money for the community and helped get a new operating table for the hospital.

“The old makeshift one started to collapse during an operation and Edna Carpenter had to get down on the floor under it and hold up the table until the surgeon finished,” an excerpt from MVWC’s history, 1921-1984, read.

MVWC joining the GFWC in 1921 is one of the on-the-dot anniversaries the MVWC will celebrate with their Grand Marshall status. The other is the 50th anniversary of their volunteer-run second-hand store, the Nearly New Shoppe.

At its beginning, Quirk described the Nearly New as running on shoestrings. Ladies from California first opened the shop and it was held together by husbands and wives associated with the store coming in to paint or fix things when the need arose. Vurnie Barnett, MVWC member and former president of the district and state woman’s club chapters, explained that the original two ladies—Jinny Comes and Bobbi Brand—wanted to provide a place for families to purchase children’s clothes. The first place to host the store in 1971 was right in downtown Ennis, across the street from where the old post office was, or as Toni Scully—former MVWC president and current recording secretary for the Montana branch of GFWC—described, across from the Ennis Pharmacy.

This first building was rented to the club by the then postmistress, Mrs. Winifred Jeffers, for something as minimal as a dollar a day or ten dollars a month. She and many others, including Storey-Masson, did not believe the shoppe would make it. “Little did she (Jeffers) know,” Barnett—a fourth generation MVWC member— said, of the incredible success to come.

“She (Storey-Masson) laughs because when the woman’s club had to vote about, are we going to buy this building? She voted against it because she said it won’t be paid off in her lifetime and she can’t burden other ladies with this responsibility,” Quirk said.

Storey-Masson laughed recalling this vote. Her intentions were in the best place. She did not want to put a financial weight on someone else’s shoulders, especially since she knew the importance of fending for oneself and could not see the store paying off in an appropriate timeframe.

“I just thought we’d be in debt forever. They’ve proved me wrong,” Storey-Masson said. “They’ve done a beautiful job. I’m proud to be a member.”

After the cheap rental space, the Nearly New took up the basement of the Masonic Temple building, behind what is now Shedhorn Sports, and the ‘third and last’ spot is the current Nearly New.

‘Third and last’ is what Scully likes to call it.

The store went through three moves and a major renovation in early 2019 and a pandemic in 2020 that forced the doors to close and donations to cease.

“And now we’re having our 50 years,” Scully said. Storey-Masson added that at one point, the Nearly New was the type of second-hand store that a person did not really want to admit going to. Now, she described the public perception of it almost as a status symbol. She can hear people gush, “Oh, I got it at the Nearly New!”

The most remarkable thing about the Nearly New is that it is completely volunteer run. Every woman who greets you as a cashier as you enter the store or talks with you about your families and the weather is a member of MVWC and is there on their own donated time. Storey-Masson—at 88 years—still works a shift every Friday morning (and is planning on walking in the parade). She said it keeps her acquainted with folks and that activity keeps her young.

“I have made so many good friends, met so many lovely ladies and many of them are really good friends. I’m really passionate about our woman’s club and how the community helps us by donating such wonderful items for our Nearly New and the monies that we take in, we give back to the community,” Sedwick said, adoringly.

This is no trivial amount of money. Scully estimated in the last 15 years, the store has probably raised $100,000 each year. In the last ten years, easily over $1 million. All this money goes back to the community. No salaries are paid, the woman’s club now owns the building the Nearly New is in and a bit was taken out for renovations a couple years back.

“When we added up the numbers, we just about fell over,” Quirk said. In a little town of just over 800 people, it is extraordinary that a second-hand store run only by volunteers can raise that much money for their community, she remarked.

“We’ve put a lot of kids through school,” Barnett said.

The women of MVWC are remarkable. They have a zest for the places they live and the people in them that is unmatched. They do all this work without expecting any thanks and are bonded and uplifted by their fellow women.

Quirk told a funny story about mask-wearing in the store. The Nearly New required masks before coronavirus vaccinations were more available, and she finally got sick of arguing with people who did not want to comply.

“Why do I have to wear a mask?” they would ask.

“I finally went into my mom mode and said, because I said so!” Quirk said. She wished she could have amended her sentence to say, “Because WE said so.” No decisions at the Nearly New or within the woman’s club are made in a vacuum.