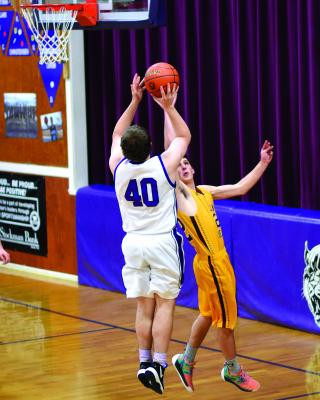 As regular season winds down, tables turn for all but Twin Bridges boys team

MADISON COUNTY –  There’s only one more weekend of regular-season play before high school basketball enters championship games. But the only mainstay of local teams seems to be the Twin Bridges boys, who just continue rolling toward what promises to be an exciting post-season. But for other teams around Madison County, there were some upsets in store this weekend.

The Ennis Mustangs kicked things off with their games at Boulder on Thursday, January 31, and both boys and girls fell in some hard-fought battles. The boys lost by 22 points, 79-57, while the Boulder Panthers snapped an 11-game winning streak for the lady Mustangs, dropping them by eight points, 41-33.

The girls would redeem themselves on Friday, February 1, though. They came back strong in a 23-point defeat of host team Granite, regaining their footing in a 47-24 win. The boys suffered an even more painful defeat than Thursday’s, falling to the Prospectors by only a single point, 58-57.

Sheridan and Harrison both traveled on Friday: Sheridan to Drummond and Harrison to West Yellowstone. The traveling teams had a tough time of it, with Sheridan falling to the Trojans 79-30 on the boys’ side and 62-24 for the girls. Harrison kept things closer playing the Wolverines, but the lady Wildcats fell by 30 points in a 60-30 defeat. The Harrison boys were the only winners on Friday, eking a 14-point victory, 55-41.

On Saturday, February 2, things certainly looked like Groundhog Day for the Twin Bridges Falcons: the boys continued an unbeaten season, climbing steadily up the state rankings as the season goes on. The Falcons topped Lone Peak 64-34, though girls’ scores had not yet been reported by press time.

Charlie and Daniel Kruer are becoming household names on the local basketball scene, and for good reason. They logged 21 and 10 points, respectively, helped along by another 10 from Jake Hughes. The closest Lone Peak came to the Falcons was matching their 13 points in the fourth quarter, but by then the Falcons’ 30-point lead wasn’t about to be stopped.

Sheridan and Harrison, both traveling on Friday, both hosted games on Saturday. Sheridan hosted the West Yellowstone Wolverines, and the Panthers fell by the narrowest of margins, 56-54. The lady Panthers would fall as well by a crushing 38 points, 50-12.

Harrison settled for a win and a loss against the Lima Bears, but has continued to show marked improvement as the season goes on. The boys fell 54-50 against the Bears, but the lady Wildcats took a dominant victory in 43-25.

The last weekend of regular season play will be a full one, with each team playing two games before the district’s top seeds descend upon Dillon’s Beaverhead High School February 14-16: