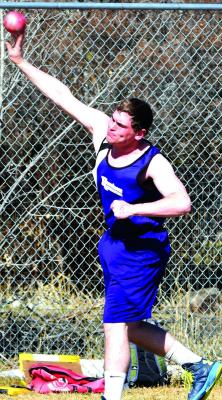 Track season off to a running start

Local athletes claimed the top spot in nine events: five on the girls’ side and four for the boys.

Whitehall’s Katie Whitehurst won the girls’ 400-meter dash in a personal best of 1:04.33, more than two seconds ahead of the rest of the field. Ennis’s Maida Knapton claimed a similar impressive victory in the 800-meter run, setting a season-best mark of 2:46 and topping second place by more than seven seconds.

In the field events, Twin Bridges freshman Hailey Pack won the discus in a personal best of 30 feet and one-half inch, while her teammate Blu Keim took the third spot with a 27 foot, 7 inch throw. Pack would also take second in the discus throw, with a toss of 85 feet, 8 inches.

Ennis’s Jourdain Klein claimed two victories on Saturday in the high jump and the triple jump. Klein leapt 10 inches higher than the second-place high jumper with a mark of 5 feet, 4 inches, and had over two and a half feet on second place in the triple jump with a season-best mark of 35 feet, 2 inches. Klein finished second at last year’s state meet in each of those events.

For the boys, Harrison’s Vern Homner took the discus title with a personal best throw of 130 feet 1 inch, putting nearly four feet on the runner-up. Homner was also second in the high jump with a leap of 5 feet 8 inches, just two inches behind Whitehall’s Tegan Robbins.

Twin Bridges’ Tate Smith also had a personal best in the triple jump, enough to claim a seven-inch victory. His leap of 38 feet 5 inches placed him ahead of Absarokee’s Wyatt Hayes.