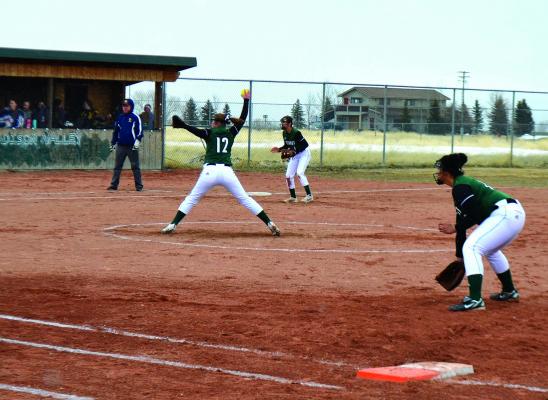 ENNIS—The brand-new lady Mustangs softball team played their second double header of the season on Friday, April 12, ending up with an even 2-2 record.

The first of the two games was a near-shutout against Browning, which Ennis walked away from with a 10-1 victory. Jenna Snider led both teams with four RBIs, while Paxton Fortner and Shae Lovett each had three quality-at-bats and Riley Robinson added two more.

Senior pitcher Whitney McKitrick also led across the board with three strikeouts. In the first inning, Ennis would lead early 1-0, by the end of the second it was 6-1 and by the end of the third it was 10-1, where it would stay.

Later that same day the Mustangs faced off against Belgrade’s junior varsity squad, a much more established program that brought the heat for the less-experienced Ennis team.

It would be another blowout, but not in the Mustangs’ favor. Belgrade would score eight runs, all in the first inning, and Ennis would be held scoreless for the first time all season.

A bright spot in a touch matchup was Addison Retherford, who pitched 10 first-pitch strikes for the Mustangs.

With spring break coming up April 18-23, softball won’t return until April 25, when they will host Manhattan at 5 p.m. They’ll travel to Anaconda the next day for a double against Twin Falls and Plains.