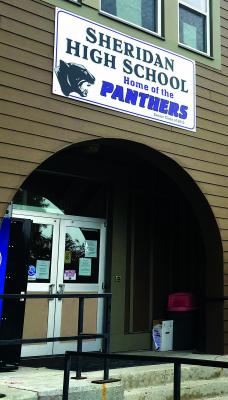 SHERIDAN—The Sheridan school board continued deliberations on a potential football co-op with Twin Bridges Schools at its monthly meeting on Tuesday, January 8, ending with a vote that approved moving forward on the proposal in a split on the board of 4-3.

The board began with a recap of the co-op committee meeting the previous evening, which focused primarily on the topics of bus driver availability to take student athletes to and from practice between the two schools, and payment for those drivers. Superintendent Mike Wetherbee said it would cost around $2,300 to transport players to and from practice, a cost that did not include fuel and which would be split between the two schools.

They also discussed the practice schedule, since Sheridan has a four-day week as opposed to Twin Bridges’ five-day week. Wetherbee noted that students would get bussed to whichever school was hosting practice after school was released and would be dropped back off at their own school by 7 p.m. each evening.

Another hot issue in co-op discussions has been the possibility of a junior varsity (JV) schedule, which would likely include six games if it were pursued. A junior varsity team could be playing the JV squads of larger teams as well, including Anaconda and Dillon.

Wetherbee noted that a “sticking point” has been maintaining a high standard for student athlete eligibility; he said that to him, that was the most important element of the co-op, noting that both proponents and opponents of the idea have given similar feedback.

“The one thing they’ve all said to me is that we need to maintain an eligibility status that’s as stringent as what we have now,” Wetherbee said. Sheridan currently checks student athlete grades every Monday, and any student with a failing grade in any class becomes ineligible for that week’s competition.

The co-op would be a three-year commitment by both schools, though the Montana High School Association (MHSA) would be within its power to cut it short if it chose to do so. The termination of the agreement would be the prerogative of the MHSA, not the schools.

Wetherbee presented the board and visitors from the public with some additional numbers on Tuesday evening, sharing the annual expenses from the past several years for Sheridan’s football program. After an expensive year in 2015 of $11,195—spiked by new uniforms for the team that year—football costs have stayed relatively consistent, between $6,000 and $7,000 per year.

Beau Decker, who sat on the co-op committee and attended previous board meetings to stay up-to-date on deliberations, expressed disappointment on Tuesday with how the proceedings had gone.

“I thought it was our job to have a proposal and have questions answered,” Decker told the board. “I feel rushed about this. I knew almost exactly the same amount before I got on the committee as I did last night.”

Board member Kendra Horn, who also sat on the co-op committee, felt that the committee had made progress toward its goal.

“I felt like a lot of questions got answered,” Horn said. “There’s a lot of details, but I think those are to come.”

The tenor of the board was one of uncertainty, with topics like ensuring students get enough playing time on a larger team, the possibility of the team becoming so large it nears the Class B threshold and the lack of certainty on bus drivers coming up again before the board prepared to vote. Board member Will Fabel made the suggestion of trying a similar co-op with a lower-profile student group that may lower the politics that the football co-op has drawn, like drama or cross country. Other board members also expressed a lack of confidence due to unknown factors.

The co-op committee had voted in favor of the co-op 5-1 the previous evening, but things were much more split on Tuesday night.

Board chairman Bill Wood offered last comments before calling for a vote, drawing on the plight of many of Sheridan’s student athletes, including his own children.

“I’m sick and tired of watching our kids get their asses kicked year in and year out,” Wood said. “Number one, it’s about what’s best for our kids.”

In the end, the board voted 4-3 to approve moving forward with efforts for the co-op. The next step will be to wait for the Twin Bridges school board to approve the move as well, and then a proposal will be drawn up and submitted to the MHSA, which makes the final decision on approving or denying the co-op. The deadline for that proposal is February 1.

Other business at Sheridan’s January school board meeting:

• The board’s monthly review of one of its board goals, this month the goal of “facilitating communication between the district and all stakeholders by using all available sources of media with the intention of promoting the school.” Wetherbee noted that it was one of the only goals where he felt Sheridan could do better.

“I would really like to see us spend time on this,” Wetherbee said. “We need to do some tweaking of strategies.” At the December board meeting, members of the public noted they felt out of the loop in the football co-op discussion and felt they hadn’t received adequate information from the school or the board.

• An update from Wetherbee on Sheridan’s upcoming solar panel installation. Wetherbee said that the panels have been ordered and are on their way, but installation won’t begin until springtime when weather is more amenable to the installation.

• Two board video trainings, which happen periodically for the board to brush up on different aspects of its members’ roles as administrators. This month’s training covered some legal basics for school boards and the collective bargaining process. The board will hold a retreat in March focusing on strategic planning and preparing the district’s 2019-2020 budget.