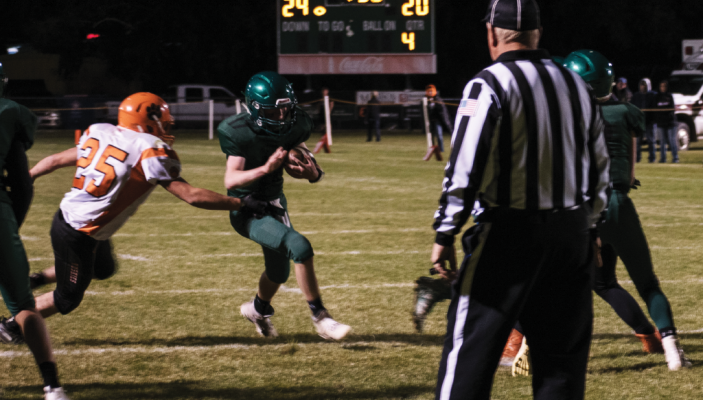 The Ennis Mustangs were behind the Absarokee Huskies before Maida Knapton and Wyatt Fredson were announced homecoming king and queen. The Huskies scored twice before the Mustangs reached the endzone toward the end of the second quarter. The second half started with the Huskies leading by six points. Absarokee promptly made it down the field for a third touchdown and their first successful two-point conversion of the night. But it was the last time the Huskies found themselves in the endzone. A football-minute later, Brand Ostler ran 55 yards for a touchdown. Daniel Johnson ended the third quarter points with a 70-yard run touchdown. The fourth quarter did not produce points until the end. Brand Ostler connected with Ian Swanson for a 20-year pass touchdown and then, successfully ran a two-point conversion. With less than two minutes left in the game, the Huskies’ quarterback threw an interception. The Mustangs’ sideline, stretching into the bleachers, exploded with excitement. The Huskies didn’t stand a chance.