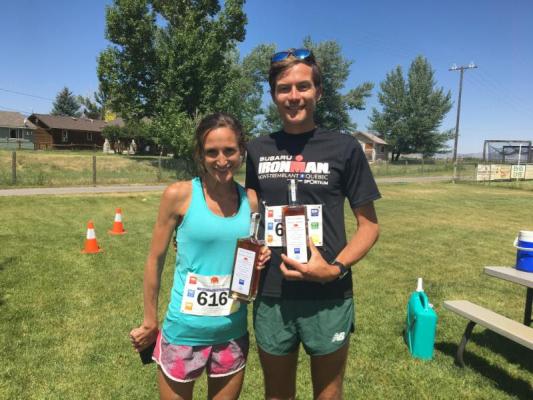 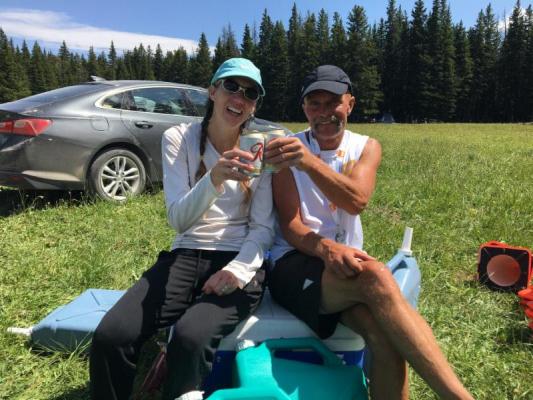 A marathon weekend for the record books

ENNIS—The Greater Yellowstone Adventure Series continued over the weekend of July 21-22 with its double marathon weekend, the only one of its kind in Montana. The Madison and Big Sky marathons saw their 11th and 4th annual iterations, respectively, and two out-of-towners nabbed three of the four marathon titles between them.

Vanessa Garlick and Kevin Hartstein both hail from Montpelier, Vermont. Both tackled the double marathon, running the Madison course on the Gravelly Range Road on Saturday, July 21, then turning around to run the Big Sky Marathon on Sunday. They were two of nine brave athletes who were up to the challenge.

“I really liked the Madison course: it was nice and hilly and beautiful,” says Garlick. “It was easier to turn over relatively fast miles as compared to some of the more technical trails.”

She’s unique from most of the people who run the Madison.

The vast majority of racers prioritize simply finishing at an altitude like that. “Turning over fast miles,” is on the minds of very few. Garlick proved that on the Gravelly Range Road: the second-place woman was about 40 minutes behind her.

She became one of only five women in race history to dip under 4 hours for the notoriously challenging course, which begins at an elevation of 9,250 feet and only dips below 8,500 feet once in its 26.2 miles. It’s a race where it’s easy to set a PW—a personal worst. But, says race director Sam Korsmoe, “it will be the one PW race that you’ll remember for the rest of your life.”

Garlick then won the Big Sky Marathon the next day, a race that is noted for the opposite: its extreme elevation loss. It begins along the same route as the Madison, but instead of staying high, the course winds all the way down into Ennis, losing nearly 3,700 feet and making it the significantly faster version of its sister race.

With one marathon already on her legs, Garlick snapped another course record by four minutes, lowering the Big Sky mark to 3:30:46. The former Butler University track athlete missed her personal best of 2:58, which she set at the Geneva Marathon in Switzerland, but says the challenging terrain and the beautiful views made it a worthy investment.

On the men’s side, Hartstein continued a string of major accomplishments.

Just two days before the Madison Marathon he proposed to Garlick in Glacier National Park, and she accepted. Garlick is enjoying her only month of vacation between completing medical residency in Vermont and beginning a job as a pediatrician, so the pair took advantage of the time off with a trip that began at Lake Tahoe, then swung up through Yellowstone, Glacier and Grand Teton national parks.

Hartstein was edged out in the Madison Marathon by Bozeman’s Adam Sepulveda, who was 14 minutes off a fourth course record of the weekend, but still the sixth fastest person to ever cover the course. But he took the victory the next day in a Big Sky course record of 2:55:55. He was the only person to break three hours on the downhill course since the inaugural winner in 2015. He missed his personal best—2:48, set at the Boston Marathon in 2016—but the downhill was exactly the kind of terrain on which he excels.

“I really like downhill running,” Hartstein says. “I think I go faster downhill, so relative to the field it’s one of my strengths. I just went hard from the beginning, but my legs were definitely sore.” After running all those hills the day before, he figures that’s to be expected.

Hartstein didn’t begin running seriously until he graduated from college, but once he did he got completely wrapped up in racing. Now, he says, he looks for interesting races whenever he travels. As he and Garlick planned their trip west, the Madison’s unique double-race weekend caught their interest.

The couple’s overwhelming success over the weekend led Korsmoe’s post-race newsletter to the title “Vermont Invasion.”

Garlick and Hartstein earned a couple bottles of Willie’s Distillery reserve bourbon for their efforts; the distillery has been supplying “trophies” in the form of full bourbon bottles to the winners of each of the Greater Yellowstone Adventure Series races.

For a few of the weekend’s racers, the Madison Marathon meant they were one step closer to another goal. The marathon is the second leg of the Madison Trifecta, sandwiched between the Madison Duathlon and Triathlon (the latter of which takes place this weekend, on August 4).

Only 24 people have earned the accolade of trifecta finisher, and so far in 2018, eight intrepid souls are still working their way toward their first title. That number was higher at the start of the summer but has dropped due to injuries and time constraints.

Unfortunately, the unlucky few who have dropped includes your intrepid community reporter. Maybe the elevation got me, maybe the distance, but mine was definitely a personal worst, considering I didn’t even reach the finish line. But Lynda Andros-Clay, a four-time trifecta finisher and the first person to attempt to do all six of the GYAS races in a single season, has a good mindset when it comes to a personal worst.

“It’s so beautiful,” she says of the course. “You just have to take your time and enjoy it.” It’s a common feeling among racers, few of whom come to chase a fast time. The spectacular scenery that follows the course is what keeps runners coming back. Andros-Clay also pulled off the double marathon last weekend and has two more races before she can claim the six-race distinction.

On the half marathon side, three of the four champions came from Montana, including Virginia City’s Jeff Millsap, who won the Big Sky half marathon with a stellar time of 1:42:27. The Madison half was won by John Wallace of Missoula for the men and Billings’ Jessica Raty for the women. The only out-of-state champion was Nancy Robinson of Jamaica Plain, Massachusetts, who won the Madison half for the women in 1:44:50.

Like most years, the Madison Marathon weekend drew runners from all over the world. The field between the two marathons continues to grow every year, and this year athletes came from nearly 40 states, as well as Denmark, New Zealand, Australia and Great Britain. It’s exactly the kind of group Korsmoe had in mind when he started the GYAS.

“You can run double or triple marathons all over the place,” Korsmoe says. “That’s not the hard part. The hard part is having a double marathon like this one, with this scenery and this terrain and this challenge. That’s what keeps drawing people back year after year.”

The final events in the GYAS for 2018 will take place over this weekend, and there’s still time to register.

The weekend will kick off with the Madison Triathlon on August 4, which begins with a swim in Ennis Lake, transitions to a bike ride from Ennis to Harrison and finishes with a 6-mile run from Harrison to the iconic Pony Bar. If they can make it through that, the trifecta participants will be done.

The next day, August 5, will be the only race not involving a single step of running: The Tour de Gravelly. The 57-mile bike race goes up and over the Gravelly Range, beginning in Ennis and ending at the Vigilante Station in the Ruby Valley. After that, a lot of athletes will have a lot of resting to do before next year’s GYAS.