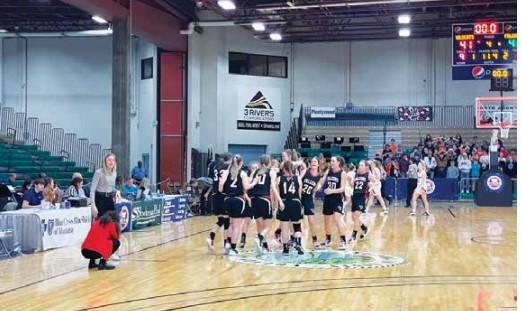 The Lady Falcons traveled to Great Falls to play in the state tournament for the first time since 2017 on Thursday, March 10. The Girls Class C State Tournament was held at the Four Seasons Arena.

When asked how it felt for the great season to be over, head coach Hannah Konen commented, “As far as the season ending, it's a bittersweet feeling. It's such a joy to share the love of basketball with the girls and I am sad to see this season come to an end, but I am so proud of what they accomplished. They made the season last as long as they possibly could, playing Saturday afternoon at state, winning two games at state, and placing 4th out of 83, is something not a lot of teams can say they have done. This was the first trip to state for anyone on the team and I believe now that they have some experience they are hungry not only to return but to improve upon their success. This team is very special and has created the foundation for our culture for years to come. They are great role models on the court, in the classroom, and in the community. A very special thank you to our senior, Lexie Stockett, who provided a lot of court leadership down the stretch during tournaments, we will greatly miss her presence.”

Congratulations ladies! We are proud of you!