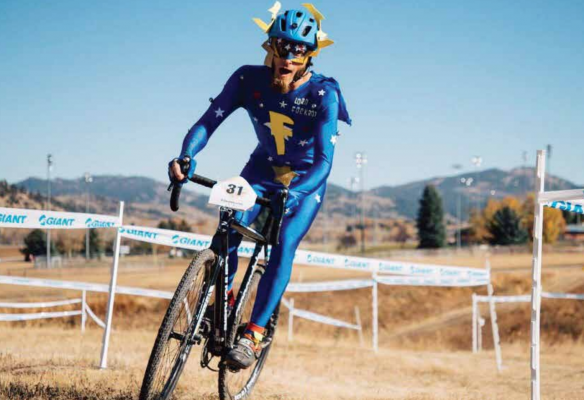 There’s a saying that Ennis Town Commissioner Cory Hardy returns to often: “Activity promotes more activity and laziness promotes more laziness.” It’s a motivational quote he’s even used as his screensaver and words of wisdom he passes on to others who might need it.

Given his affinity for that inspirational utterance it may come as little surprise that Hardy, owner of Hardy Drywall, spends a lot of time outside of work pounding and peddling the pavement, gravel and trails of Montana. That active lifestyle is something he hopes his community will take to as well, rather than scrolling Facebook and the like.

This summer, for his ninth time, Hardy is competing in the annual Greater Yellowstone Adventure Series, an event organizers dubbed “Not Your Pansy A** City Races.” He’ll be taking part in the Madison portion of the series, in not just one but five – yes five – events.

The first three combine to create Madison Trifecta, which includes a marathon, duathlon and triathlon. Athletes who pull off this three-day endurance extravaganza reach the coveted TBA status – since anyone who can do it is a total bad a**.

In addition, Hardy will tackle the Tour de Gravelly, a 40-mile up and 17-mile down bike race. Then, to top it off, Hardy will take it one step further, competing for his first time in the 2nd annual Madison Ultra.

By definition an ultra race is anything longer than 26.2 miles or 42 kilometers. The 50K Madison Ultra runs between the banks of the Madison River and the highest point on Gravelly Range Road – Monument Ridge – an exactly 50K route. Runners can choose between the Up, starting at the river and running, you guessed it, up the ridge, or start at the top and descend to the river.

Hardy said he hasn’t decided which Ultra adventure, up or down, he’ll tackle. He is sure it will be a bit of a challenge though, as the route equates to 32 miles. The longest he’s ever ran in a single stint was around 26 miles. In those longer runs Hardy explained he ultimately goes into “Robo Mode,” running with perfect form and focusing only on the task at hand.

Achieving TBA status is one thing, but Hardy is tackling these races not just for glory, but for the Madison Valley Medical Center’s mission to provide expert care with small-town compassion.

Interested parties can sponsor Hardy by the race or by the kilometer. To do so, MVMCF Executive Director Dawn Conklin said work is underway to create posters with QR codes to be placed around the community and in The Madisonian. A scan of the code will link directly to sponsorship forms. In addition, sponsors can reach out directly to Conklin at 406-682-6641. “We are grateful for every gift, large and small, as each one makes an impact on this community,” said Conklin.