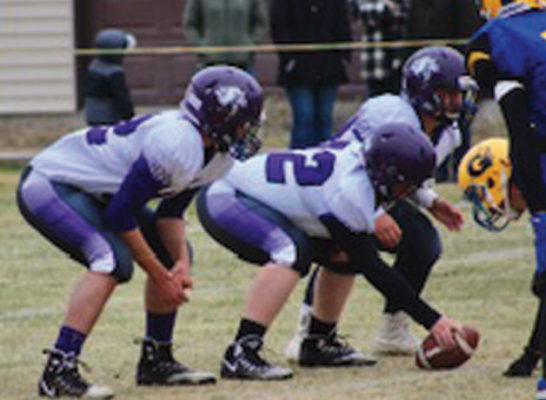 The Sheridan Panthers rolled into Gardiner to face the Bruins in a conference game last Saturday.  Both teams knew it would be a close physical game.  The Bruins opened the game on their first drive with a score and took a 6-0 lead, but the Panthers answered back with a score of their own.  Gardiner scored again with a touchdown to close the score at 8-12 to end the quarter.  The Bruins scored twice in the second and made a 1 point conversion taking a 25-8 lead midway through the second quarter.  The Panthers made a sustained drive late in the second quarter to close the gap and went into the locker at half-time trailing 25-15.  The third quarter was all Panthers and with a short time on the clock in the third they took the lead to close the quarter 29-25.  The fourth quarter saw a slugfest with both teams turning the ball over on downs and midway through the fourth the Bruins running back, Elijah Bird scrambled for a 40 yard touchdown to give the Bruins a 32-29 lead going into the final 4 minutes of the quarter.  The Panthers drove the ball down the field and turned the ball over on downs at the Bruin 4 yard line and it looked like the Panthers hopes of winning the game were gone.  The Panther defense pushed the Bruins back and Kaiden Batzler tackled the Bruin’s running back in the end zone for a safety with just over a minute left in the ball game. The Panthers took the ball down the field and turned the ball over on downs at the Bruin 12 yard line and the game ended in a Panther loss 32-31.  The Panthers fall to 0-4 in conference play and 3-5 on the year.  The Panthers face the Valley Christian Eagles in their final game at home on Friday at 7:00 pm under the lights.

Falcons lose to the Big Horns at home​

The Big Horns came to Twin Bridges to take on the Falcons under Friday night lights Oct. 18. It was a close game that ended with the Lone Peak Big Horns scoring the final touchdown and taking the win. Lone Peak put up the first points of the night during the second quarter. Falcons had zero points and the Big Horns had six points to start off the fourth quarter. Lone Peak reached the end zone first, but Twin Bridges followed up with two touchdowns. Nate Konen ran five yards for the Falcons’ first touchdown and connected with quarterback Bryce Nye for the extra point. Another Nye-Konen connection resulted in their second touchdown, passing 14 yards. Trystan Harmon made a successful run for the two-point conversion. The Big Horns were able to get past the Falcon defense for one more touchdown and took the final lead.