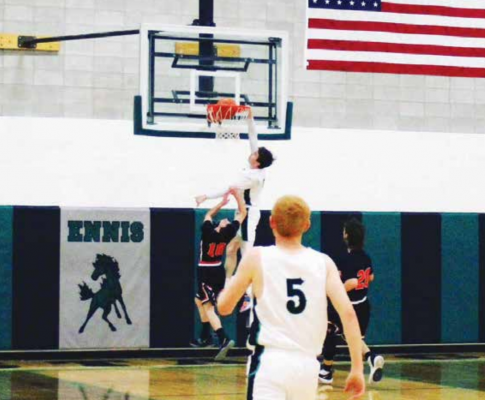 It had been several years since the Ennis Mustangs had a matchup against the West Yellowstone Wolverines, so when the Wolverines came to Ennis on Jan. 29 there were plenty of unknowns about how the bout would play out.

Leading up to that game the Mustangs’ heads were high, while they lost against Twin Bridges 61-45 on Jan. 22, they had a big win on the road against Lima, 66-26, and another win against White Sulphur Springs on Jan. 28.

In the end, the West game was a close one, with the Wolverines taking home the win, 52-50. Regardless of the close score though, Ennis born-and bred varsity Coach Jared Smithson said it was one struggle of a game during this short season which he’s happy to put behind him.

“We couldn’t find our rhythm, which showed in the score and our defense,” Smithson said, recalling a quick moving Wolverine guard that stopped the Mustangs in their tracks. “I saw the boys get scared for the first time this season, we shelled up, it was more freezing than fighting.”

In early February the Mustangs were only games into the season, but already more than halfway through it. Looking back at what’s gone down, Coach Smithson recalled the boys’ first game of the season against Harrison, which was actually Harrison’s sixth game, and by the time Ennis competed against Twin Bridges, Ennis was only three games in. Twin had more than twice that under their belt.

Despite being behind, Smithson said both of those matchups were positives. Ennis lost to Harrison by just three points, coming down to the free throw line, “but it was super fun, it was intense to start out the season like that.”

Even the Mustang loss against Twin Bridges on Jan. 22 was a bright spot in the season. “My kids saw that they are able to compete with a team we know is really good,” said Coach Smithson, recalling his team bumped out of their rhythm early with Jaxson Kloote getting into foul trouble. “Still, we were able to knock down shots and compete against Twin Bridges, a really, really good team.”

Senior Ian Swanson, said Coach Smithson, has been the leader of the Mustangs this year, on and off the court. “He does a great job getting us into the right position, keeping us motivated.”

Junior Brand Ostler is another “lead by example” kind of player, and on top of that, he’s one of the Mustang’s best all-around scorers.

Junior Jaxson Kloote also gets gold a gold star from his coach. Kloote, said Smithson, is his “little big man,” measuring in at 6’1”, “he’s a tough kid, there’s no quit in him, and he’s way stronger than he looks.”

While Swanson, Ostler and Kloote stand out, it really does take the entire team to make things happen on the court. “When we play together as a team we are really, really tough,” Smithson said. “It’s just when we step back and individualize that we break down very easily.”

Back-to-back games in Gardiner on Feb. 4 and a home game against Manhattan Christian on Feb. 5 were the next on the Mustang’s schedule. Coach Smithson said Manhattan Christian, being second in the state, was high on his team’s mind, but first, it’s best to focus on what’s closest at hand.

“It’s like how we got too far ahead of ourselves in that West Yellowstone game,” said Smithson recalling the most recent loss that left a bad taste in his mouth. “We have to focus so we get the job done in Gardiner, we’ve got to make sure we show up against them.”

As far Manhattan Christian, known far and wide for their prowess on the court, Coach Smithson knows it won’t be easy. “I’m not even saying we can beat them,” he said. “But I know we can compete with them. And I think that will really give the kids confidence. We’ve got nothing to lose, and everything to gain from playing with them.”

That’s the lesson being taught at this stage of the season – questioning, ‘What are you going to do when the competition gets tough?’ Posing that that scenario to his team, Smithson asks, ‘Are you going to fight, flight or freeze?’ “I’m trying to help my boys be fighters,” he said.