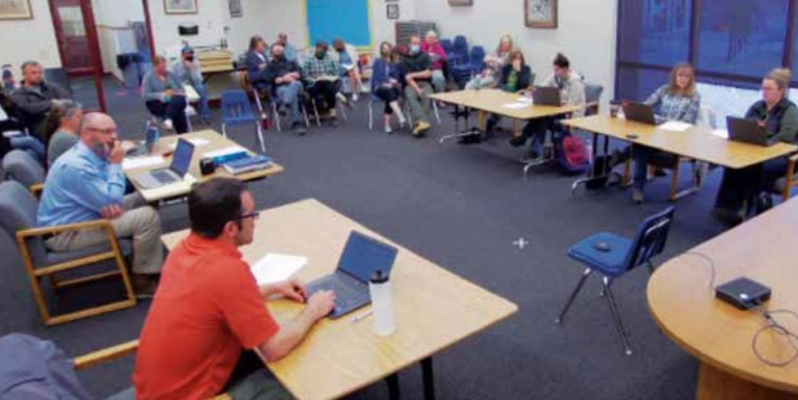 Twin Bridges School Board met for a special meeting last Wednesday to take action on the long-standing budget agenda items. Two motions were made and passed regarding program and position reduction and reassignment.

The district’s Average Number of Belonging (ANB) has been decreasing since 2015 and declining enrollment numbers led to the need to consider how to replenish the general fund. The original motion discussed and amended by the board was proposed by Board Chair Steve Janzen and would result in a 1.0 full-time employee savings.

The final motions appear as follows:

“The buses and the bus barn need more attention than I can provide so I look for other people to use part of their day or to find people and pay them extra to take care of it,” Kaiser said. After the resignation of a former transportation director, some duties from that position were absorbed by Kaiser in his superintendent role.

Board members brought up the overlap they saw in the agricultural education and industrial arts programs as a solution for saving some money while keeping both programs and focusing on getting more elementary aged students on-level in reading and math.

“And that’s why this is up for consideration and it is a beginning, but I don’t think it’s an end to what we have going with budget issues in school. It’s the beginning of a conversation,” Board member Jaime Wood said. He felt that this motion would help the district get through another year, but that the board will find themselves in this position again.

Scheduling-wise, Kaiser said it will complicate things but, “It’s doable. Get everybody involved in the conversation and (we can) make it work.”

This first motion was passed 4:1, Alexis Sandru voting against.

The second motion authorized the superintendent to discuss reassigning the foreign language/history position with a 0.5 library position. The school will provide the means by which the library endorsement may be obtained. With this motion, Kaiser has the authority to begin conversations with affected parties before bringing more specific information back to the board. It remains vague to allow him time to do so.

Towards the end of the almost seven-hour board meeting on March 9, a staff member expressed interest in taking on the library position while maintaining their current position. The second motion was made in response to that option.