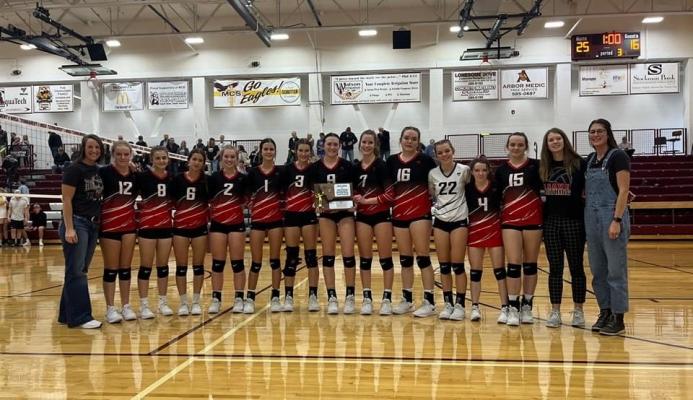 For the first time in 16 years, the Twin Bridges Falcons are back at the Class C state volleyball tournament. The Falcons begin state action at 12 p.m. on Thursday against the Bridger Scouts. The Falcons are led by returning 2021 all-state outside hitter and Carroll College signee Callie Kaiser and returning 2021 all-conference selections libero Ayla Janzen and outside hitter Emma Konen. In addition, Ellie Meek runs the Falcon offense; Kara Dale, Kyle Pancost, and Ruby Waller are key contributors at the net for the Falcons; and Kinsey Johnson steps in as a defensive specialist in the backrow.

While the Falcons have no state tournament experience on the court, they have plenty off the court: Head Coach Kendall Keltz and Assistant Coach Alexis Sandru are former teammates and all-state Falcon players who made the trip to state all four years of their careers in the early 2000s. The last time that Twin Bridges brought hardware home from state was Sandru's senior year in the fall of 2002 when the Falcons fell in a second state championship match to the Bridger Scouts. For Keltz and Sandru, their pride in the Twin Bridges volleyball program was what led them back to coaching the program two years ago, and the two have been working to instill a sense of pride and expectation of success in the Falcons ever since: "As alums, we are unabashedly proud of this program, and we love this program. And, we've been talking to the girls about this since day one. When you step out on that court, you're playing for the program -- your present team and past and future teams, as well as the community that has supported the TB VB program all along the way" --  Coaches Keltz and Sandru.

With nearly 80 class C teams competing in volleyball, making the final eight is an accomplishment in and of itself. But, after a season of so many firsts for the current players, the Falcons are hungry to add on to the list of accolades in their final week of the season.