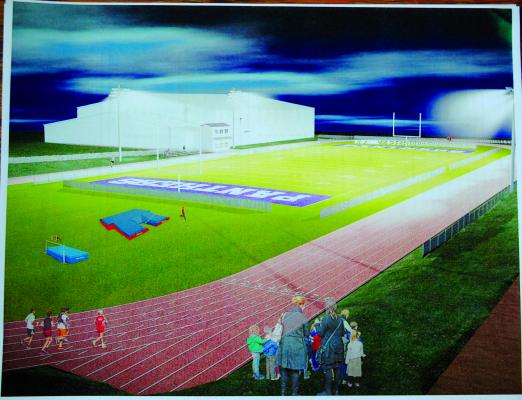 SHERIDAN—The Sheridan school board held its monthly meeting on Tuesday, July 10, at which primary topics of discussion were the planned renovation of the high school’s football field area, an update on the district’s audit and review and adjustment of several of the district’s policies and forms.

The addition of a track facility at Sheridan High School was approved earlier this year, and on Tuesday superintendent Mike Wetherbee presented a slideshow going into more detail as to the specifics of the project, which will be presented to engineers and potential funders of the project.

The new track will be quite an undertaking to install, as there is currently a grade of nearly 5 percent between one end of Sheridan’s football field and the other. That would have to be leveled before the track itself could be laid and the football field re-seeded. The gradient of the area surrounding the current field poses the biggest consideration for the new project: drainage. With the removal of such a significant amount of earth to ensure the track is flat, the way groundwater and rainwater flow over and through that section of land will change.

“We have water sitting in places we’ve never had water sitting this year,” noted board member Will Fabel, referring to the Madison Valley’s particularly wet spring that led to extensive standing water in low places. “We need to make sure that water stays where it should be.”

The “track” Sheridan will be replacing is currently little more than a grass area surrounding the football field, as Wetherbee showed in photographs in his presentation.

The school’s track team runs the 100-meter dash on a long, flat stretch of lawn. The new facility will allow for the school to host district track meets, as well as offer a space for community use that would offer dog-free walking. It will feature a six-lane track with an eight-lane sprint straightaway along one side. However, due to the area of the space where the track will be located, it will be the standard 400 meters in length, but will not be a legal track for state records, as it will be too oblong in order to fit in the space.

“I don’t know that I’ve been to any Class C school that doesn’t have at least some kind of a track,” noted Wetherbee. He utilized the example of Lambert High School in Richland County, which recently renovated their track facility. Lambert has an enrollment of 44 students, Wetherbee said. Sheridan has an enrollment of 49, which means the new facility for Sheridan is not a unique endeavor. As the project moves forward, the football field will also be resurfaced, new pits for shotput, discus, pole vault and long jump will be installed, and the stadium lights may be replaced.

At their July 10 meeting, the Sheridan school board also:

• Heard an update from district clerk Rebecca Larsen on Sheridan’s annual audit, which was returned with no findings, which means a fiscal success for the district. Moving forward, Larsen said the district will continue “trying to find new ways to increase the integrity of having only two or three people handling the money.” Superintendent Wetherbee said it was the best audit he’s seen in his tenure.

• Approved the hiring of Leticia Shrenk as Sheridan’s new head cook. Shrenk has worked with the school in the assistant cook position and will take over as head cook for the 2018-2019 school year.

• Approved new policies that offer a way to determine when to cancel school activities due to air quality once fire season rolls around. The board settled on a metric of whether or not the Sheridan “S” on the hillside was visible from the school, a distance of about three miles. This, coupled with online air-quality monitoring systems, will be used to ensure student-athlete safety at practice and health at school-sanctioned events.

• Adjusted a few of the school’s policies and forms. The board adopted a slightly adjusted form for renting equipment and spaces from the school for private events and read over weight room and open gym liability forms to ensure student safety in school facilities.

• Revised the language of forms limiting staff-student interactions via social media to ensure that technology is used appropriately and only for school-related contact. In the future, the final say will rest with superintendent Wetherbee as to whether particular instances of social media use are acceptable.