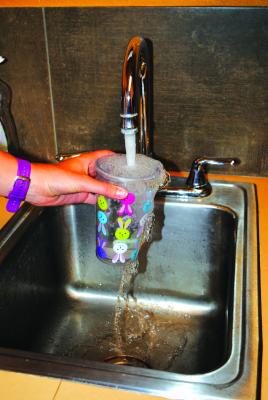 ENNIS—A recent federal report surveyed school districts around the country and found that fewer than half of them regularly test for lead in their water supplies.

The Associated Press reports that around 43 percent of districts surveyed did test for lead, and that of those, nearly 40 percent reported elevated lead levels in their water.

In response to the report, Skye Borden, director of the Environment Montana Research and Policy Center, said that one of the most common sources of lead exposure in children is through their school water.

“In all likelihood, confirmed cases of lead in schools’ water are just the tip of the iceberg,” Borden says. “Most Montana schools have at least some lead in their pipes, plumbing or fixtures. And where there is lead, there is risk of contamination.”

In April, Environment Montana conducted its own survey, taking 221 samples from schools in Montana’s most urban centers: Billings, Missoula, Great Falls and Bozeman. Of those samples, over 75 percent tested above 1 part per billion (ppb) of lead.

The EPA’s action level for water lead content is 15ppb for public water sources, but, the Environment Montana report states, children are far more sensitive to lead, which can cause a drop in IQ as well as learning disabilities, nervous system damage and stunted growth, among other health problems.

The American Academy of Pediatrics recommends a 1ppb action level for school water sources. That’s about as much as one drop in an Olympic-sized swimming pool. For perspective, the most severe readings in the Flint, Michigan water crisis measured over 13,000 ppb; in the same swimming pool, that’s more than 13 cups.

An additional challenge is the fact that once elevated lead levels are discovered, there are no set steps that a school district is required to take to address the problem, says Borden. Schools aren’t even required to reveal the results of any tests they choose to voluntarily conduct, no matter how high their readings might be.

“Unfortunately, what that sets up is both an inclination to not test at all, and potentially an incentive to conceal poor results if they have them,” says Borden. She says the DEQ has EPA guidelines they can pass along to schools, but recommendations and suggestions are all the further they can go.

“They would certainly make recommendations if a reading was poor,” Borden says. “But there’s no mechanism to require schools to take any action.”

Environment Montana makes suggestions on that front, including requiring that schools test all drinking water outlets, instituting the 1ppb standard for lead content, and proactively removing any parts from their water systems that contain lead. But as of right now, those too remain only suggestions.

There is no state or federal law that requires schools to test the lead content in their water, so any schools that do so are testing voluntarily.

The concern for rural school districts is the fact that many of them—more than 100 in Montana—serve as their own water utility, and often use wells. Those schools are required to conduct tests, since they aren’t part of a greater city system that would be tested independently.

In the Madison and Ruby Valley districts, testing water lead levels isn’t the norm. Each town has a required schedule on which they test their public systems, but most of the schools don’t conduct any testing, and each district has its own reasoning for that.

“We’re lucky our wells are so deep and have pretty good water,” says Elser. “We pick sites that were built in the 1960s and 1970s to test, to make sure we’re always testing the places where the risk would be the highest.”

The city’s water has shown such good results that Ennis has been granted a waiver that means they only test for certain substances—fluoride, barium and mercury, for example—every nine years. That’s because going back in the test results, those substances have never shown up on any reading.

Lead and copper tests are done every three years on the Ennis wells, and the most recent results are equally promising. The public works department publishes an annual water quality report that is available to the public and includes the results of all water tests.

The most recent readings showed less than 1 ppb of lead in the town’s water, and less than 0.2 parts per million (ppm) of copper, far below the action level of 1.3. The source of those counts, Elser says, comes mostly from residential plumbing or service lines, which is something the department can’t control.

Ennis Schools gets its water from those two public wells, which means incoming water has already been tested by the public works department. In terms of their own tests, however, they don’t conduct any.

Borden says one important reason for schools to conduct their own tests is that even though a public water source may show great readings, contamination can often come from a single outdated appliance, like a water fountain with old pieces that contain lead. She’s seen instances where a school’s water quality is good, but one or two drinking fountains post elevated readings. They’re specific problems that are easy to address, but schools won’t find them unless they test their water independently and at the sources.

Twin Bridges - Twin Bridges doesn’t conduct school-specific tests on water either. Like Ennis, the town’s water comes from two public wells, which are tested on a DEQ-established schedule.

The town’s most recent reports also show lead and copper readings well within set action levels: 2ppb for lead and 0.5ppm for copper. They fall far under the metrics for public water systems, but slightly above the action level set by the American Pediatric Association for childhood exposure.

Twin Bridges also has another reason for not testing its school water, says public works director Sam Novich. The entire school was replumbed within the last ten years, and any lead piping or fixtures that may have contained lead were removed and replaced.

“Our water is about as close to spring water as you can get,” says Novich, comparing the Twin Bridges supply to Big Spring in Lewistown, which is known for its clarity and mineral content. “The only things that measured a little high on our water were iron and calcium, but there was nothing above federal levels.”

Like Ennis, Twin Bridges also possesses a waiver that allows for less-frequent testing for certain minerals, because they’ve never been detected in any of the town’s tests.

Sheridan - Sheridan School District also does not conduct school-specific water tests, allowing those reported by the city to suffice. This is within their right, but they may be the district in Madison County with the most reason to conduct those independent tests.

In 2016, Sheridan’s water report was grim when it came to lead levels. The annual test showed readings of 32ppb, more than double the federal action level. Copper was still well within threshold levels, but was still elevated, at 0.37ppm. Public works director Curtis Green attributes those elevated levels primarily to a pump failure in Sheridan’s well system.

The city had engineers come to address the problem, and DEQ gave Sheridan a two-year period in which to get levels back to normal. But with some replacements of parts to fix the pump and the installation of a corrosion control system in the pump house, lead and copper levels were back to normal within one year.

Like the rest of Madison County, Sheridan was on a three-year cycle of testing for lead and copper, but Green says he’s overly cautious now, and conducts tests every six months.

“We want to keep a handle on it, so it doesn’t catch us off guard,” he says. “With this kind of thing it’s always better to err on the side of caution and be aware of it.”

Those levels have since been addressed and the town’s 2017 water quality report—this year’s hasn’t been released yet—reflects this: Sheridan’s water lead level was reported at 4ppb and its copper level was the lowest of all the Ruby Valley communities at 0.08ppm.

But, Sheridan faces other water concerns now that the lead and copper issues have been resolved.

Of the towns four wells, only one is currently usable, and it’s running near capacity just to keep up with the current rate of use. The mayor issued a code red restriction over water use, temporarily suspending all lawn watering in an effort to conserve water.

Those wells serve to fill a 300,000-gallon tank that serves its users, and that tank is currently less than half full, which puts a damper on the fighting of any structural fires that may occur. There’s a possibility of a new well in the future, but that remains uncertain.

Harrison - The Madisonian was unable to obtain a water quality report for Harrison or Norris by press time.

For those who are interested, the annual water quality reports published by each Madison Valley community can be found either on the towns’ respective website or by calling county or city public works departments.