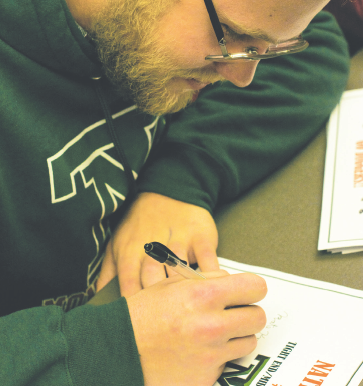 Nate Konen to the Orediggers

Hallways on both sides funneled students into the school’s foyer. Konen stat behind a long table under a striking black and red falcon painted on the wall. His high school coach, Brett Nordahl, stood next to him to announce Konen’s accomplishments of advancing in his football and academic career.

Coach and player hugged in the echoes of applause. Family members who could make the after-school celebration came together for some photos, and then a surge of students crowed the table where Konen sat.

The stack of Orediggers-green trimmed paper dwindled as he signed dozens of autographs, “Nate Konen #7.”

Konen selected MTU for its academic and athletic opportunities. He is second in his class and plans to pursue a degree in electrical engineering.

Nordahl said Konen’s intelligence is his biggest strength on the field. Konen understands the game well and puts himself in positions to be successful. Konen made Twin Bridges’ varsity eight-man football team his freshman year.  He was a captain on the Falcons for his junior and senior years.

Konen was selected for first all-conference inside linebacker, second team all-conference fullback and an all-state selection his senior season. He was also selected to compete in the Bob Cleverly 8-man All Star game at Bob Green Field in Butte May 30, 2020.

Konen is a diverse player capable of success as a center, tight end, fullback and inside linebacker.

“He had a breakout year offensively,” Nordahl said.

“I’m ready to play in a place where everyone’s favorite thing is football,” Konen said.