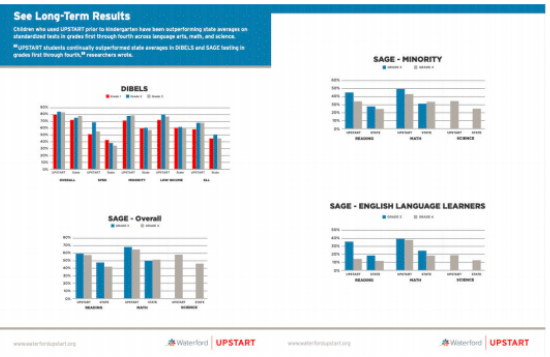 Waterford UPSTART was created as a software-based program designed to prepare children for kindergarten and empower parents as a child’s first educator. “Kids do better when they feel like they’re being supported by their parents,” Kim Fischer, director of public relations for Waterford, said.

Waterford UPSTART began as a partnership between Waterford and Utah State Legislature 11 years ago. At that time, the state was looking for a way to prepare families and their children, with limited preschool access, for kindergarten.

Similar to Montana, Utah has rural areas and spread out populations. It was realized that putting money solely into preschools may not end up benefitting the whole population. A legislator in Utah had heard of Waterford and the discussion turned to how access could be provided to families without having a preschool nearby.

“We already do this in the schools, so how can we do it in the homes?” Fischer asked.

Pam Birkeland, Superintendent of Schools in Madison County, recalled working at schools in Helena, Mont. and coming across students who did not know how to hold a book when entering kindergarten. It takes a lot of work to catch up after starting behind, and students are 25% more likely to drop out if beginning public education this way, Dr. Claudia Miner, executive director of UPSTART, said in a TEDX talk.

“It (Waterford UPSTART) provides everyone who participated the opportunity to have their children in a more ready spot to go to school and be successful in school,” Birkeland, who recently spent time learning about Waterford UPSTART at an event, said. Being a first-time parent to a child about to enter school brings up multitudinous questions. It is not always obvious what you are supposed to do to prepare children for school, Birkeland said. UPSTART aims to guide parents through the process with a software program. For 15 minutes each day, five days a week, parents work on reading, math and socioemotional skills with their children for a school-year period of time the year before entering kindergarten. The algorithm caters to the child’s needs by identifying areas that need extra time. Families are given a computer and internet access if they do not already have it, and if at least 80% of the program is completed, they keep the computer. They have access to the software program until their child enters kindergarten.

To enroll, parents may go to waterfordupstart.org and start the process. A summer orientation will be provided for Montana families this year to familiarize parents with the program. A personal parent coach checks in on families as they go through the process and are there for guidance. 80% of those enrolled must meet certain rural codes. Families looking to be a part of the program living in larger areas will be put on a waitlist until the 80% criteria is met. After it is, families in larger areas can enroll on a first come first serve basis. The goal is to reach all families in need.

Having this education outside a brick and mortar setting and screen time were brought up as causes for concern. In-school options for young students do exist around Madison County. Twin Bridges has a funded preschool program and Alder has a free Running Start program that unable to make use of this option because of cost.

“We always have a handful of kids that go to preschool of some sort and we always have a handful that don’t have any previous experience,” Ms. Konopacki said. If students are on the young side of the spectrum and lack a form of preschool education, they often repeat kindergarten. Fischer brought up the fact that screen time is just part of our world now. It is more a question of what type of screen time and how much, rather than if it should be allowed. UPSTART aims for interactive, educational and high-quality screen time. Dr. Miner explained the wide range of UPSTART. It can be used for anything from providing for underserved students to supplementing existing preschool programs. Whatever early education problem there is, UPSTART aims to find a way to help.

“We like to remind people we are not trying to replace anything. We are only trying to fill the gaps,” Fischer said