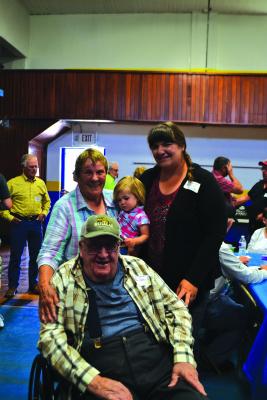 CARDWELL— James Carmody remembers many of the antics he got up to as a boy at Cardwell School. Some of the most exciting involve the use of wax paper on an old-fashioned slide fire escape in order to make it a speedier ride.

“We’d slide down it at lunch until one of the teachers caught us,” Carmody laughs. “The girls in their dresses had to be particularly careful.”

Carmody also remembers the need to watch out if you were the first one down. The slide had a door at the bottom that the leading slider had to remember to open, or his ride would come to a very sudden stop.

Carmody was one of hundreds of alumni in attendance at Cardwell School’s centennial celebration on Saturday, August 4. It looked much like any school reunion would, except instead of only one graduating class, more than seventy years of Cardwell alumni were represented.

The school, which graduated its 99th class of eighth-grade students this spring (with three graduates) opened its doors in a celebration that took 18 months to plan and pulled out all the stops to commemorate a century of small-town Montana education.

“We had no idea how it would turn out,” says Sally Kreis. “There’s no centennial ‘handbook’ anywhere, so we just had to do our best pulling this all together.” Kreis taught at Cardwell for three decades and touched the lives of hundreds of students and just as many families. She knew nearly everyone at the centennial celebration personally.

The celebration was centered in the school gym but spread throughout the building’s two stories into the classrooms upstairs. In each room, alumni could be found watching slideshows of old photos, sharing memories of their own school days and reconnecting with friends long separated.

Bob Wilkinson graduated from Cardwell in 1961, 35 years after his father, Roy, had also attended. Wilkinson came over from nearby Whitehall to attend and picked his father out in photos of the school basketball team, student groups and classes. He’d been multi-talented, participating in just about every activity.

“You kind of had to do everything at a school this small,” remembers the younger Wilkinson.

Back in the gym, things look very similar to when the building was built in 1917. The hardwood basketball floor is scuffed from a century’s worth of games but still gleams in honor of the occasion.

The raised stage at the front of the room is hung with blue velvet curtains and features 1910s classroom replica, complete with desks and chairs from Miranda Martinson’s mother’s Cardwell classroom. Martinson’s grandmother—who will soon turn 99—also taught at Cardwell, and her grandfather was a student there. For them, as for many, Cardwell School is a family institution.

There were spaces in the gym at Saturday’s celebration where alumni and friends could paint tiles to be used in a memorial project honoring the centennial and write their memories of the school for future generations of students. Gayle Sacry wrote the story of his family, who had attended for generations.

“I graduated from the eighth grade at the Cardwell School in 1950. My mother graduated in 1925 and my father graduated in 1926,” wrote Sacry at the memory table. “I am proud to have been a student at Cardwell school and look upon my years with fond memories. The things that I learned at Cardwell instilled within me enough confidence to allow me to continue with my life.”

The gathering also held a bittersweet note, as attendees honored the memory of Lou Ann Masinelli, who had taught at Cardwell for 30 years. She had been one of the largest contributors to the centennial celebration and worked tirelessly toward its preparation until passing away in May. She was on the minds of many as they celebrated Cardwell’s history.

“If only Lou Ann could see all this,” says Sally Kreis with a smile. “This whole thing was her brainchild.”

For most of Saturday, alumni, family and friends of Cardwell School shared memories, food, laughter and photographs in celebration of the institution.

Arguably, none had more memories than Tom Carey, the school’s oldest living graduate, who finished the eighth grade in 1947. Four generations of the Carey family attended the centennial, from Tom and his wife, Helen, to their granddaughter, Katherine Smith and their great-granddaughter, Taylor, who isn’t quite old enough yet to attend Cardwell herself. All eight of Tom and Helen’s children attended Cardwell School.

Hundreds of people from all over the state—and outside Montana—came to honor Cardwell.

One thing is for certain: if the community remains as tight-knit and supportive as it has been for its first hundred years, the school will still be thriving through its second hundred.