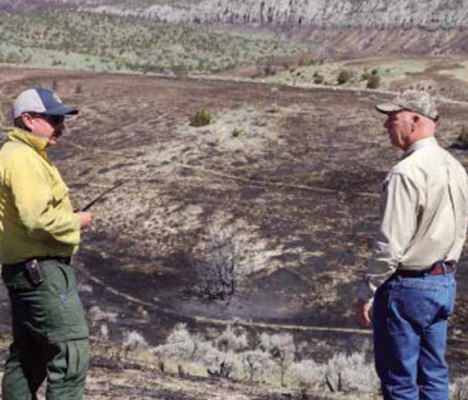 Other fires begin to ignite across state

It’s official – wildfire season is upon us with more hot, dry weather in the forecast.

Looking at the extremes, in southeast Montana the Northern Rockies Coordination Center predicted the stuff wildfires are made of: temps on June 15 of up to 109 degrees accompanied by with single-digit relative humidity and 40 mph wind gusts.

Here’s a look at what’s taking place on the wildfire front in Montana with information gathered from the U.S. Forest Service, Montana Department of Natural Resources & Conservation and InciWeb.

This blaze, eventually deemed human-caused, was first reported to Dillon Dispatch on the afternoon of Wednesday, June 9. According to the Montana Department of Natural Resources and Conservation, local, state and federal firefighters responded quickly including fire departments from Gallatin, Broadwater and Jefferson County.

The fire, which grew to 330 acres at its height, was located six miles southwest of Three Forks, west of Hwy 287 and north of Hwy 2. It burned in grass, brush and timber in extremely steep areas inaccessible by fire engines. Four helicopters dropped water on the fire's forward progress to reduce its spread during the first day. Fire resources worked through the evening and the fire was 100% contained by Sunday, June 13.

Approximately 54 structures in the area, located on private lands, were deemed at risk. Ultimately none were affected, and no one was injured during the blaze’s short lifespan. The Jefferson County Sheriff's Office deemed the fire’s cause as human.

As of June 14 this blaze of unknown origins had burned 174 acres in Deep Creek Canyon.

According to InciWeb at approximately 3:45 p.m. on Sunday, June 13, a fire was reported near mile marker 18 in the Deep Creek canyon area near Townsend, Mont. The fire was estimated at 200 acres and burning north of Highway 12 East. Multiple resources were on scene with aircraft assisting with water dropping missions.

The cause of the fire is still under investigation. As of June 14, the fire was burning in timber, brush and grasses with weather forecast is calling for more hot, dry and windy weather conditions for the next few days.

According to Custer Gallatin National Forest a fire of unknown origin was reported at around 3:30 p.m. on Sunday, June 13, burning about 12 miles south of Red Lodge, Mont. and eight miles north of Clark, Wyo. The 40-acre blaze is burning in predominantly sagebrush and grass, very near the border of Montana and Wyoming.

As of June 14 the fire had Forest Service firefighters and Bridger, Belfry and Red Lodge Fire Departments on scene with an order for more ground and helicopter crews.

Hot, dry and windy weather conditions were anticipated Monday with temperatures reaching up to 85 degrees and 10 to 15 mile per hour winds. Firefighters are anticipating additional growth given these conditions.