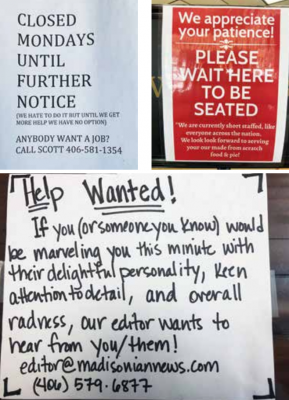 When help is wanted:

The sign posted on the Gravel Bar door says it all: “Closed Mondays until further notice. We hate to do it but until we get more help we have no option. Anybody want a job?”

Lunch time on Thursday and the Gravel Bar was humming, customers taking up every table. Servers and bartenders are moving at warp speed. Still, the bar and restaurant that has, in various incarnations, been a fixture in Ennis for more than 100 years must shut its doors one day a week.

Scott Kelley has owned the Gravel Bar for 11 years and says this is about the busiest and most challenging time he remembers, given the hiring difficulties facing many employers in Madison County.

Marshall Bettendorf has a birds’ eye view of commerce along Main Street, Ennis, as executive director of the Ennis Chamber, working from a diminutive office in the heart of downtown.

Bettendorf cited examples of chamber members who have had to curtail operations because they can’t find enough people to work.

Ruby Valley businesses are by no means immune from the trends that seem to be affecting employers across the country.

Bread Zepp (formerly Bread Zeppelin, still a rock and roll bakery) in Sheridan had to change its business model. Owner Carrie Gibson says she made the decision in March this year to scale back operations and menu.

“We remodeled our business,” she said. “We didn’t have enough employees to serve breakfast and lunch. Now we focus on pizza and are open 2 – 8 p.m., Tuesday through Saturday.”

Gibson says her business has filled the labor gap with college and high school students who are doing a good job. “They are awesome, couldn’t do without them,” she says, but worries how the restaurant will manage this winter when the students return to school.

Mike Walter, whose family has owned Walter’s Family Foods and Ace Hardware for several generations (his great-grandfather started a grocery store in 1889) has also found a talent pool this summer among local students.

“It doesn’t seem like we’re getting the applicants that we used to get,” Walter says, while noting the new young hires are doing well and filling the gap during his busiest season.

Both Kelley and Walter see the causes of the area’s labor shortages as complex, attributed to a confluence of events and realities.

“Housing,” says Kelley, while noting the “unprecedented boom in southwest Montana. Also we’re seeing more tourists here than ever before.”

The lack of affordable housing is often cited as a hurdle in attracting employees to work in Madison County.

Walter agrees, pointing to a shortage of housing stock in the Ruby Valley.

Tom Franzoia, a construction management specialist visiting from California was enthusiastic about applying for a job with the Ennis Public Works Dept. His enthusiasm waned when he learned there is little if any available housing in the area. “Also, the jobs in Bozeman and Big Sky pay better. You have to think about that,” he said.

Federally enhanced unemployment benefits are often cited as an inducement to employees to stay home.

Montana ended those federal benefits June 27. Now the state is offering a one-time, $1,200 “return-to-work” bonus. So far 3700 applicants have applied state-wide. Applicants must work for four weeks before applying at montanaworks.gov. The state also posts job listings on the website that currently shows 17,000 openings in Montana.

According to the Montana Dept. of Labor and Industry, Madison County’s unemployment rate at the end of May 2021 was 3.5%. This number reflects a workforce of 4,084 people. Of those, 3,940 are employed; 144 are unemployed. This number doesn’t include students, retired people or those not looking for jobs.

The U.S. Dept. of Labor Bureau of Labor Statistics (BLS) publishes monthly reports on unemployment. Payroll employment rose by 850,000 in June; but the unemployment rate changed little at 5.9%. Nationwide job openings were little changed at 9.2 million at the end of May.

The lingering effect of Covid is another factor. According to a BLS July 8 report, “In June 2021, 6.2 million people did not work at all or worked fewer hours because their employer closed or lost business due to the coronavirus pandemic. This is down from 7.9 million in May 2021 and from 49.8 million in May 2020.”

The National Federation of Independent Businesses said July 1 that 46% of small business owners reported job openings they could not fill in the current period, down two points from May but still above the 48-year historical average of 22%.

“In the busy summer season, many firms haven’t been able to hire enough workers to efficiently run their businesses, which has restricted sales and output,” said NFIB Chief Economist Bill Dunkelberg, in an NFIB July 1 press release. “In June, we saw a record high percent of owners raising compensation to help attract needed employees and job creation plans also remain at record highs. Owners are doing everything they can to get back to a full, productive staff.”

Employers are trying different strategies to lure and keep good workers. The Wall Street Journal reported July 1 that “Nearly 20% of all jobs posted on job search site ZipRecruiter in June offered a signing bonus, up from 2% of jobs advertised on the job search site in March.”

For the Ruby Valley Medical Center (RVMC), labor shortages are a serious concern. Amy Pack-Young, Human Resources Manager, says RVMC offers signing bonuses for some positions. When critical positions go unfilled, operations are affected, she says. “All of our departments rely heavily upon each other and being short-staffed makes that difficult.”

She cites available, affordable housing for employees as a big challenge. “The current real estate market has had a massive impact on staffing. Qualified applicants are eager to move here, but there is very limited housing availability. The properties that are available are simply out of their price range.”