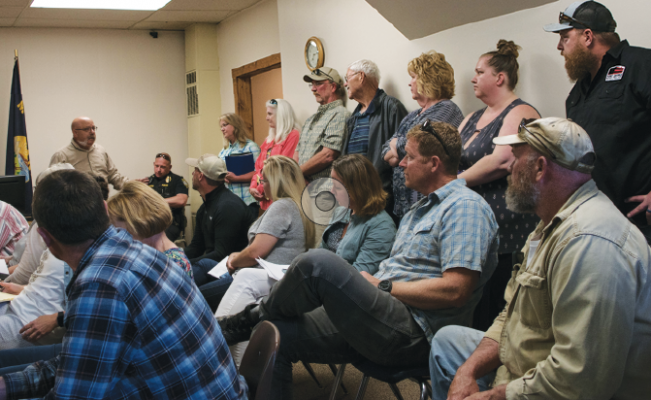 When Big Vehicles Come to Ennis

Concerns of RVs and Crashing 18-wheelers Packed the Town Hall

Fri, 06/21/2019 - 10:06am
By
Hannah Kearse
news@madisoniannews.com
“The passion in this room needs to go to MDT,” Council member Lisa Roberts said. “It takes community passion.”

Two issues had the town council meeting on June 13 packed with people: permits for recreational vehicles and the highway conditions on the east entrance of town that have contributed to 18-wheelers barreling into business buildings.

According to a 1996 ordinance, RVs aren’t permitted to be a permanent residence in Ennis town limits, but it hasn’t been thoroughly enforced until recently.

“We’re trying to move this town forward,” Mayor Blake Leavitt said. “We cannot continue to go down the road of ‘because we used to do that.’ We have to be very mindful of what our rules are that are in place, and because they were very lax before, does not mean we need to continue that.”

One lot in particular was the focus of the discussion, a 3,500 square foot lot on the corner of First and Hugel Street. Terry James and Kim Pitman spoke on behalf of their 82-year-old mother Eloise James, about a conditional use permit upon purchasing the lot for about $50,000. Eloise is an Ennis-snowbird who prefers the milder winters in Mississippi, and though she wouldn’t be a year-round occupant, she wants to keep her camper on the small lot.

The lot has been used for RVs for at least the last 25 years; however, according to town zoning codes, that was never supposed to be its use.

“If you’re going to do this conditional thing, you got to be specific and you got to say the owners are allowed to do it however upon sale or transfer of the lot, the next lot owner needs to come and talk to us,” Zoning Director Art Behar said.

Building on the lot is difficult because of its corner location, small size and proximity to Moore’s Creek. Any permanent structure would have to be small and pushed back because it would have to allow driver to see around the corner. The floodplain map is another concern. Thus, the appeal of a putting a camper or RV.

“I feel like the precedent has already been set for this particular lot,” Terry said. “So, to tell me now that you want to make my mom be the precedent and rule her out is a little unfair. It’s been this way for years.”

The 18-wheeler crash that damaged the Riverside Motel on June 11 was a familiar scene to business owners on the east side of town. It’s the third vehicle to crash into Riverside Motel this year. Those in the room agreed that it was only a matter of time before one of the crashes killed someone. They demanded action from their city council members to fix the problem, with better lighting, signage and rumble strips on the highway leading into town.

There was frustration on both sides of the long table where the council members sat. According to the town council, progress with Montana Department of Transportation is difficult. Council member John Bancroft said that they have to get cooperation with the state before anything can happen because it’s a state highway.

“I understand that John, but I’m done passing the buck to other people,” Willie’s Distillery owner Robin Blazer said.

Blazer estimated that the 2014 crash into their business costed them $88,000. She came to the council in 2016 with specific requests about the issue and didn’t receive response. The crashes continue and nothing has resulted in better conditions.

The town council urged Ennis residents whom were concerned about the highway signage, lighting and condition on the southeast entrance of town, to take the discussion to the Commissioner’s Office and MDT.

“The passion in this room needs to go to MDT,” Council member Lisa Roberts said. “It takes community passion.”