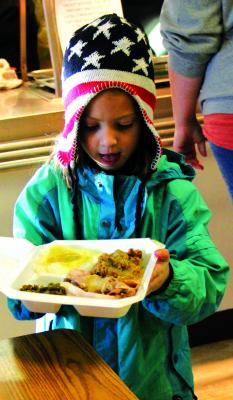 TWIN BRIDGES – On Sunday, December 9, the veterans of Twin Bridges and the surrounding area kept up a tradition six decades strong.

The Twin Bridges community Christmas dinner has become a staple of the holiday season for the town, routinely feeding around 300 people, free of charge. Army veteran Joe Witherspoon has been helping with the event for nearly a decade.

“We had a group of veterans that decided to put on this free Christmas dinner, and then it evolved into a dinner that we also use for a fundraiser,” says Witherspoon, who helped to cook and serve the dinner again this year. “Of all the activities we do during the year, this is our biggest fundraiser.”

Volunteers cooked more than 20 turkeys on Sunday evening, serving them with all the fixings to anyone who wanted to join in. Women for Veterans supplied homemade desserts, while the Twin Bridges Rotary Club helped serve and local 4-H clubs delivered plates to community members who weren’t able to make it into town to partake.

“The original dinner was in 1958, and it was a moose feed,” says Doug Martin, one of the event coordinators. Since then the fare might have changed, but the community has only grown stronger over the years.

After dinner, revelers enjoyed a fundraising raffle featuring locally donated items. The featured prizes were two 75-pound sides of pork, although Witherspoon said they’ve adapted that particular element a little bit. The organizers consulted with the Butcher’s Block in Butte, who supplies the products, and changed things up.

Last year’s community dinner raised around $4,000, which over the course of the year was used for the military funerals the local veterans put on, as well as the local kids’ fishing derby each July and Twin Bridges’ veterans’ memorial, which dates as far back as the Civil War and which gets updated with plaques commemorating local veterans who have passed away.

Attendees also got a chance to visit with Santa, who is becoming busy with less than two weeks before his big night. But he made time for a worthy cause, and hundreds of Twin Bridges residents who certainly made the nice list this year—at least for a night of shared community, food and fellowship.