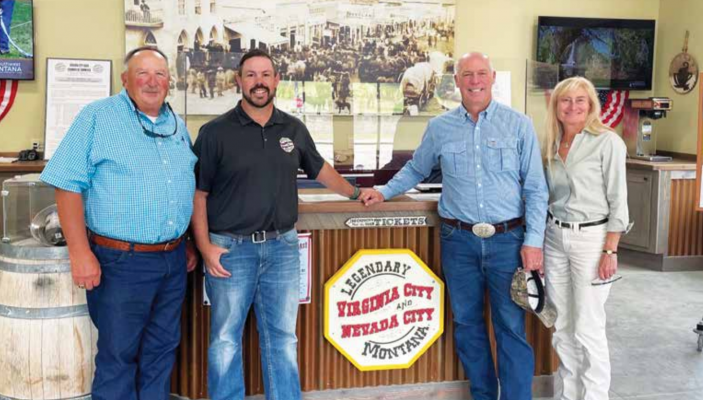 Officials from the Montana Heritage Commission, the state agency that manages and coordinates stateowned resources in Virginia City and Nevada City, report record-breaking visitation for 2021.

On August 10 Montana Governor Greg Gianforte made a stop in Virginia City to discuss the community’s economic impact on the state. Bed tax income – state funding directly related to visitation – was on the docket. For the last 25 years the MHC has been annually allocated $400,000 in bed tax funds, used for preservation efforts in the historic communities the commission oversees. During the latest legislative session, with support from Gianforte and local representatives, Senator Jeff Welborn, Ken Walsh, Ryan Lynch and Jim Keane, MHC’s bed tax allocation was significantly upped from $400,000 to $1 million.

“We are very grateful for the assistance from the Montana Legislature and Governor Gianforte, and excited to see the record-breaking tourist visitation through this ongoing season,” said Elijah Allen, director of Montana Heritage Commission, in a recent press release. Allen continued, “Virginia and Nevada City have a $74.4 million economic footprint, 42 incorporated businesses, and contribute to 1,226 jobs for Montana. This site remains the number one state-owned tourist destination and we will continue to implement the business model of putting all earned revenue into saving Montana’s history and heritage.”

The press release states that the MHC is the only state agency that is self-sufficient and receives its funding through tourism related income and donations. It does not receive any taxpayer funds. The commission oversees over 300 1860’s buildings and structures dating from the 1860s and over one million Americana artifacts from the 1860s to 1960s.

Visit https://www.savemontanashistory.com for more information on MHC’s projects and progress.