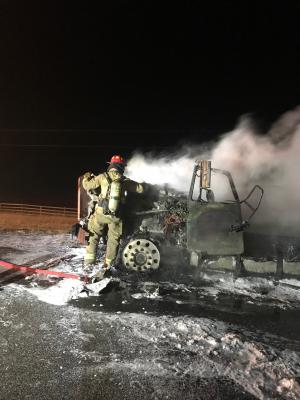 No injuries, no spills reported after January 28 crash

The truck crashed near mile marker 63, a site that has seen multiple crashes in recent years due to poor visibility as cars travel over a hill between Ennis and Norris. The crash on Monday did not have a known cause, but Madison County dispatch received a call just after 7:30 p.m. that a truck was in flames. It had been transporting hot liquid tar, used for asphalting roads.

Madison County sheriff’s deputies responded to the scene along with the Harrison Volunteer Fire Department, Madison Valley Rural Fire Department and county Department of Emergency Management crews. The flames were extinguished in a joint effort by both fire departments, according to a DEM press release.

“The tanker hull and the outer hull were breached due to the heat of the flames, but the inner hull of the tanker remained intact,” the release reports. “None of the hot liquid spilled and the driver did not sustain injuries. The semi-tractor and tanker were a total loss.”

Montana Highway Patrol closed Highway 287 until nearly midnight, when the northbound lane was reopened. Both lanes of traffic weren’t completely open until around 6 a.m. the next morning, January 29.

The Madison County Sheriff’s Office has not yet reported what factors caused the crash.