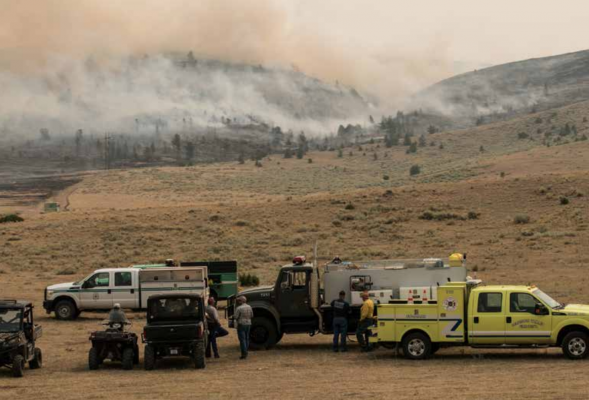 Smoke began to billow over the grass foothills of the Madison Range near Norris Aug. 23.

The wildfire started in the Bradley Creek Road area. Over 1,800 acres of private, state and Bureau of Land Management land have burned as of Aug. 25. The cause of the fire is unknown, and no investigations have taken place, according to the Department of Natural Resources and Conservation County Assist Team’s Fire Information Officer Crystal Beckman.

The Sunday afternoon winds shifted within hours of fire crews responding to the wildfire. The fire sped over the grassy hills and encroached toward Montana Highway 287. Heavy smoke hindered visibility on sections of the highway causing DNRC to close off a mile for about an hour Sunday night.

A private land owner in the area lost an undetermined amount of livestock in the fire’s initial swift spread. About 80 fire personnel are combatting the wildfire, with 20% reported as contained. Residents around Bradley Creek Road and Norris Hot Springs were warned about the nearby wildfire, but no evacuations have been issued. The fire was pushed off the east side of the highway. It continues to burn the area predominately of junipers and sage brush.

High-voltage powerlines string across the charred and burning landscape. Some have been damaged. According to the DNRC County Assist Team, Northwest Energy is monitoring the powerlines, which continue to transfer energy.

Potential thunderstorms were forecasted Tuesday through Thursday, which could cause erratic winds. DNRC said the moderate fire behavior has a minimal chance of spreading beyond containments.

Three helicopters from the Twin Bridges Airport are dropping water on schedule, according to Public Information Officer Bonnie O’Neill. Hotshot crews constructed a contingency line along the western edge of the fire where dead trees made it difficult to engage the fire.