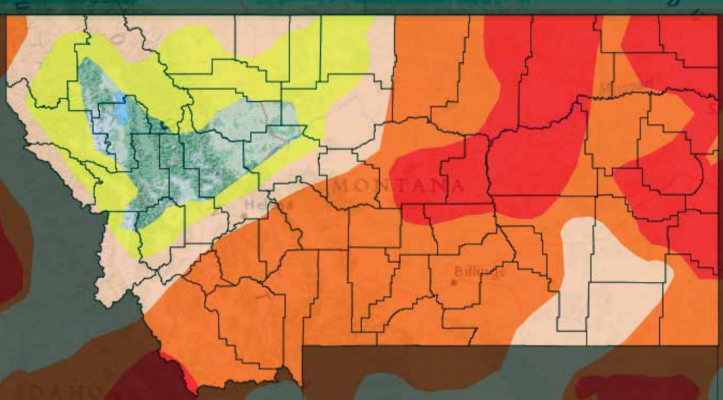 While the major wildfires in Montana are now under control, drought remains high on the minds of government officials. Following the June 30 release of the Summer 2021 Drought Forecast Report, Governor Greg Gianforte on July 1 declared a statewide drought emergency, calling on the USDA to declare Montana a drought disaster area.

“Every region of the state faces severe to extreme drought conditions, and the situation is getting worse. These alarming drought conditions are devastating our ag producers, challenging our tourism industry, and could bring a severe wildfire season,” Gov. Gianforte said in a press release announcing the state emergency. “This emergency order makes available all necessary state government resources to mitigate the impacts of this drought and protect Montanans.”

Further, the forecast stated that over the course of the next eight to 10 weeks, drought conditions will likely worsen across most, if not all, of Montana.

Drought conditions as of late June 21, 2021 were substantially worse than at the same time last year when approximately 52% of the state confronted similar conditions.

Gov. Gianforte said, “I ask all Montanans and folks who are visiting to take necessary precautions and do their part to prevent wildfires.”

The July 2021 forecast projects below-normal precipitation throughout the state and a 40 to 50% chance of above-normal temperatures across much of Montana.

The report also indicates drought encompasses nearly 90% of the western U.S., with more than half of the region in the highest two categories of drought intensity.

The governor’s declaration directs the Departments of Agriculture, Livestock, and Natural Resources and Conservation to provide maximum assistance to the U.S. Department of Agriculture on drought-related activities to secure timely economic assistance from the federal government.