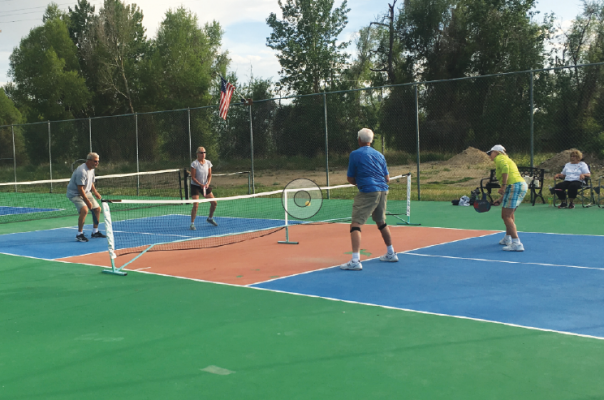 Sheridan Town Council approved for the fire department to proceed with grant and loan applications that would help fund a new firetruck, and for the second tennis court at the Raymond Lyall Silve Memorial Park to be repaired and accommodate pickleball. Mayor Bob Stump also announced at the meeting on June 10 that aquifer testing on Well #1 would begin the next day.

The Park District Board agreed to help fund the Pickleball Club convert and repair the second tennis court at the park into two more pickleball courts. Since the PDB transformed the other tennis court into two pickleball courts last year, more people have been using the court. According to Sports & Fitness Industry Association, pickleball is the fastest growing sport in the country.

Sheridan town council approved the conversion, which will have both tennis and pickleball lines painted. Portable nets will allow both sports a space to play in Sheridan. PDB will match 50 percent of the estimated $8,000 cost with the Pickleball Club.

Sheridan’s Fire Chief, Ben Hitchock, is looking for a new firetruck in the $100,000 range, which is based on the United States Department of Agriculture Office of Rural Development providing 35 percent of the cost with a grant, and the fire department’s feasibility to pay back a low-interest rate from the USDA RD that would cover the rest of the purchase.

“It’s necessary because the truck we have now is 35 years old and it’s getting harder to get parts for it,” Hitchock said.

A new truck would be more efficient as well, being able to transport more than two personnel and having a better pump to more effectively put structural fires out. Hitchock presented the council with a firetruck from 2000, which he said would meet their current needs and in 10 years would be worth more than the truck they have now. That potential sell in the future would allow the fire department to continue upgrading their firetruck over time.

But town council member, Rahn Abbott worried about replacing a 35-year-old truck with a 20-year-old truck that would take 20 years to pay off. Stump encouraged waiting on the purchase, as a better opportunity could arise in the near future. Both realized the need of a new firetruck and supported moving forward with the funding applications.

“It’s ancient,” Stump said. “But I want to make sure that we pick the right vehicle.”

Well #1 was restored and cleaned using airburst technology, which uses high-pressure air to create a pulsing energy that reaches beyond the stone walls of the well and pulls out debris and buildup. Aquifer testing on Well #1 is underway, dumping hundreds of gallons of water into an irrigation ditch. Stump is hopeful that in a month the well will be back online.

Cindy Adams and Esther Lince, drug and alcohol prevention specialists for southwest Montana, presented information about their “Get Addicted to Life Coalition” program. They received 2.1 million dollars in grants to bring awareness and help prevent substance abuse in Madison County through youth outreach. They came to the town council meeting to find active partners to fill vital roles throughout the county. Adams and Lince want to train and provide resources to teachers from kindergarten to fifth grade and develop a parent empowering class as well as work with the DUI task force.