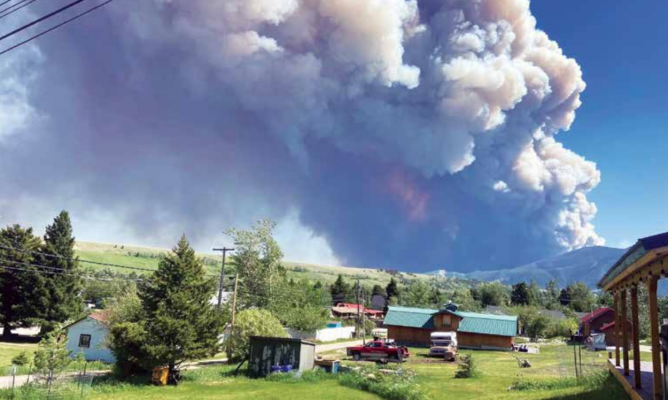 Cooler temps and rainfall a short but welcome reprieve

Cooler temps, higher humidity and – gasp – even a bit of rainfall on Father’s Day were a boon for teams fighting wildfires in Montana. The reprieve was likely a short one though, as another hot, dry weather pattern is set to return this week.

While none of the nationally monitored blazes are in the Madison County area, that doesn’t mean the drought hasn’t affected the area. A Stage 1 Burn Ban was recently instated after commissioner approval on June 22.

According to Madison County Director of Disaster and Emergency Services Joe Brummell, this ban which puts a halt to open burning usually isn’t instated until much later in the summer. Campfires and outdoor cooking are still permitted during a stage 1 ban.

Late July or even early August is historically when the ban comes into play, “So doing this in June is really not a good thing,” said Brummell, who noted that other counties in the area already have the stage 1 ban in place.

Last week Brummell and fire chiefs from Madison and Beaverhead Counties along with representatives from the Department of Natural Resources and the Forest Service attended a regularly scheduled fire council meeting – drought and subsequent wildland fire risks were hot topics during the discussion.

“Of course, everyone is on edge, it’s really a matter of not if but when,” said Brummell, noting the Robertson Draw Fire outside of Red Lodge which is burning early in the summer at elevations above 9,000 feet. “That doesn’t usually happen until really late, late summer, so that’s telling you that even the fuel loads at higher elevation are already dried out, and that’s not a good thing.”

Year-to-date there have been 18 wildland/grass fires in Madison County, said Brummell. All but one of those were human caused, with most occurring due to open burns and one due to a lawnmower sparking a flame. The naturally caused fire was due to high winds knocking a power line into a dry cottonwood tree.

Speaking of lawnmower-caused fires, which may not be an immediately obvious threat, there are a number of other commonplace activities that can start an unintended fire. Brummell said chains dragging from trailers can easily lead to sparks, as well as hot exhaust systems coming in contact dry grasses on roadsides or fields.

“We recommend carrying a fire extinguisher with your swather, or even when mowing your lawn, where hitting a rock can cause a spark,” said Brummell.

Here’s a glimpse of the latest Montana wildfire activity as of Monday, June 21 with information gathered from InciWeb and Custer Gallatin National Forest.

Located near Townsend, Mont., this fire ignited via yet-unknown causes on June 13. Since then, the blaze spread northeast and south of Highway 12, growing to a peak of 4,648 acres as of Monday, June 21. More than half of the burned area is on private land with the remainder on U.S. Forest Service and Montana State Land Trust properties. An evacuation of the Grassy Mountain area was issued shortly after the fire was reported and later lifted on June 18.

A fire briefing on the morning of the 21st noted that thanks to cooler temps, up to a half-inch of rain the day prior, as well as firefighter efforts, the fire was nearly 50% contained. A fire line was being held along Highway 12 with an enforced 35 mph speed limit in place. Perimeter cleanup, known as “mopping up,” is also taking place along the southeast perimeter. According to InciWeb, projections are positive, with spread potential low as management continues throughout the week. The estimated full containment date for this fire is Thursday, July 1.

As of Monday, June 21 this 29,474-acre, human-caused fire was 45% contained but continuing to spread. It ignited on June 13, spreading through grass brush and timber as the town of Red Lodge, seven miles to the north, looked on. Evacuations of surrounding areas were ordered and later lifted as of June 20, but many areas are in evacuation warning status and a number of Forest Service closures and evacuations remain in place as of June 21.

Wildlife has impacted firefighting efforts – according to Custer Gallatin National Forest grizzly bear activity in the northwest side of the blaze prompted crews to disengage for a time. If fire and grizzly activity allows, crews plan to get back to action in the area soon. More than 300 firefighting personnel were assigned to the blaze early this week, focusing efforts on structure protection and containment.

Located 25 miles east of Bridger, Mont., this fire is near the southern end of the Crow Indian Reservation in Custer Gallatin National Forest. It was first reported on the evening of June 15. As of Monday, June 21 the fire was 20% contained and mapped at 5,400 acres with cause unknown. Public lands in the area have been closed and pre-evacuation notices were in place for 25 primary residences in the Sage Creek area of the fire. The Crooked Creek Fire perimeter is well northwest of the Pryor Mountain Wild Horse Range and is not impacting the wild horse herd that resides there.

On June 21 InciWeb reported minimal fire behavior with full containment predicted for July 17. Two hundred and twenty-one personnel were assigned to the blaze early in the week.