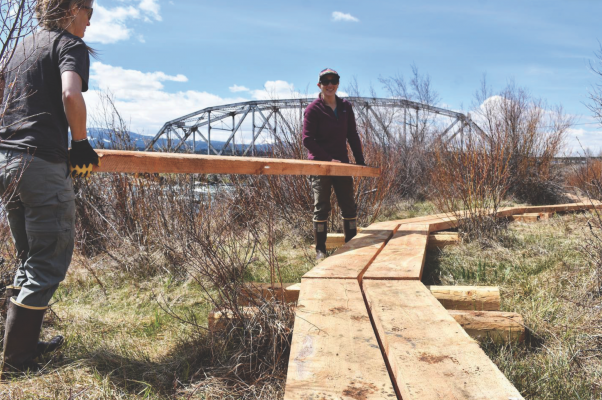 Phase one of the Madison River Foundation’s Three Dollar Bridge Riparian Restoration Project, consisting of constructing a wooden plank-bridge trail over the wetland area, was completed on June 3. The second phase of installing and removing electric fencing started the next day.

The Three Dollar Bridge access to the Madison River was well on its way to becoming a muddy slip-n-slide because of its multi-use popularity. Small wetland plants became matted on the muddy slope, and mud completely overcame large areas. The best path down to the river was a personal interpretation, deciding which large willows to grab on to and scattered boulders to step on.

“We want people to enjoy the resources and for the habitat to have a chance to survive,” MRF Project Manager, Chelsea Pardo said.

The Three Dollar Bridge project is the first of an overall riparian restoration project, which will restore areas on the Madison River to their natural state. While these strips of wetlands in between water and land make up a small portion of the total land mass, they’re an extremely important component to healthy rivers and the surrounding ecosystem. Riparian areas are a critical habitat for wildlife and help filter pollutants. When healthy, they reduce erosion and lower water temperatures.

“There was pretty good evidence that there are areas that have changed,” Parker said. “You can tell by the species that are currently there, what used to be there. An example: scattered birch is an indicator that there used to be a lot more willows.”

Temporary electric fencing will be constructed during cattle grazing times to limit livestock’s access the river. During the times the cattle aren’t grazing, MRF will rally team members and volunteers to remove the fencing. The 14,180 feet of fencing is solar powered and with the help of volunteers, can be quickly erected and removed the occasional times a year that it will be necessary. Removing the electric fence in the winter prolongs its lifespan.

Already existing electric fencing that isn’t wildlife friendly will be removed during the second phase of the project, which will be completed in July. A wooden fence will stretch along the Three Dollar Bridge parking lot to funnel people into the four points of entry leading to the 790 feet of plank-bridge trails.

Small willow trees, enclosed in wire fencing to keep wildlife and people from damaging them, will be planted in three pods in between access points. The vegetation will make the slope stronger and help restore the wetland area. This third phase also includes posting signs at the parking lot about the importance of using the trails.

The Three Dollar Bridge portion of the project will be completed by the end of summer.