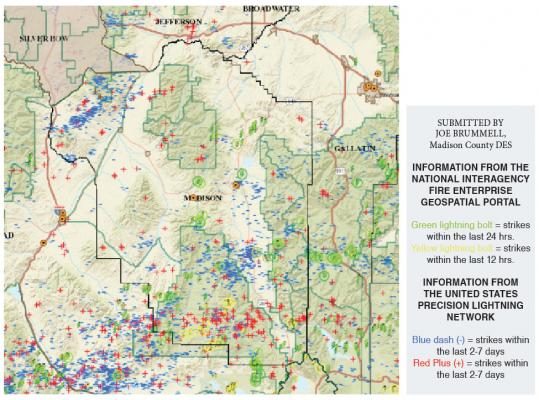 The Madison County Commissioners approved a countywide burn ban, with the exception of Big Sky Resort Area, during its meeting July 30.

The valleys of Madison County are in high wildland fire danger because of recent high winds, high temperatures and low precipitation. Open burning of any kind and fireworks are prohibited on all private lands in Madison County. This is a stage one burn ban.

Madison County Deputy Director of Emergency Management and Fire Warden, Joe Brummell, said that from July 23 – 30, satellites in the region reported over 1,200 lightning strikes and electrical activity throughout southwest Montana.  Madison County has had 17 fires this season, eight of which happened since July 21. At press deadline, they have all been put out or are contained, but over 141 acres have burned. Machinery and lightning strikes have caused most of these fires.

Arson is suspected for a fire that happened near Ennis Lake. The July 28 fire burned two acres, including a propane tank that Madison Valley Rural Fire District Station out of Ennis put out. It was the first propane fire that the fire department has worked on outside of training.

The countywide burn ban doesn’t include Forest Service, Bureau of Land Management or other public lands because of their higher elevation. The grassy valleys are drying out but there’s still a good amount of moisture in the forests.

“Public ground in Madison County falls under different rules,” Fire Management Officer at the Beaverhead-Deerlodge Forest Service in Ennis, Jim King said. “The county is first to do it because of the lower elevation.”

Big Sky is exempted from the county burn ban because of its higher elevation too. Burn restrictions in Big Sky are set at the Big Sky Fire Chief’s discretion.

“It’s a completely different environment,” Deputy Fire Chief of Big Sky, Dustin Tetrault said. “We have a better feel of what the fuels are like up here.”

Last year, the Forest Service issued its burn ban for Madison County a week or two after the county did, according to King. A discussion between multiple departments on the current conditions on public lands will happen on Aug. 6. To avoid public confusion, the departments aim to make a unified burn-ban decision.

“We try to all go in to make it easier for the public,” King said.

Currently, four major fires are burning in Montana: The Moss Ranch Fire in Flathead County, the North Hill Fire near Helena, Beeskove Fire in Missoula County and the Bannack Fire south of Butte.

“Be extremely careful going outdoors,” Brummell said. “Even with barbequing or a fire pit, it can still spark up and cause a fire. If you see smoke call 911. The faster we get on it the faster we can put it out.”