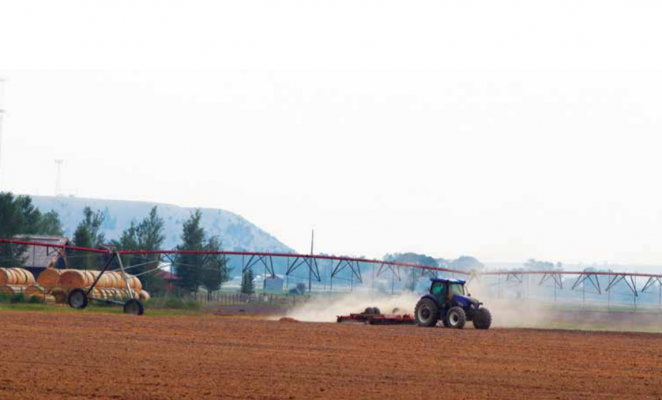 Dealing with drought: A ranching perspective

Harrison area rancher and angus cow breeder Bob Sitz hadn’t bought hay since his father passed away in 1989. Typically, his 40,000-acre operation produces enough hay to feed 1,400 cows with enough excess to sell about 3,000 tons of it each year.

Not this year. In June Sitz predicted his ranch’s hay production might fall short for the first time in several decades. He purchased 1,200 tons of hay and 500 tons of straw – much of it from Idaho since local supply was already short. That foresight paid off. He’s already seen a 30% drop in his first cutting as streams run dry and his irrigation pivots sit idle.

Sitz’ family has been ranching for a century. From what he gathers, a drought this severe hasn’t been seen since the 1930s. His family started ranching in Montana since 1958, “And this is by far the worst drought we’ve ever seen,” he said. “We haven’t seen anything like this.”

A big thing to consider, said Sitz, is that as reservoirs and high mountain lakes drain, it’ll take a major amount of snowfall to recoup what’s been lost this spring and summer. And with things so dry, “It’s going to take a lot to soak up this country,” he said, estimating it’d take four inches of rain just to get the grass to grow again. “This year is bad enough, but if we don’t get a good winter, it’s going to be in really bad shape next year.”

“Horrible,” was Ruby Reservoir Dam Tender Bill Wood’s response when asked how things are looking at the Ruby Valley’s reserve of water. The reservoir never filled this spring, the first time that’s happened since 2003. Currently water levels are where they should be in August, said Wood, with inflows at some of the lowest levels in history.

A gauge where the Ruby River enters the reservoir typically reads an input 140 cubic feet per second, said Wood. Currently it’s coming in at half the usual amount. That’s where water users are feeling the pinch. Whatever comes into the river is what Wood sends out, so lately it’s only been around 68 cfs flowing into the lower Ruby.

Water users down the river aren’t getting what they need, said Wood, prompting some ranchers to shut down their irrigation ditches altogether due to the low flows.

Rights to the water are prioritized by claims dating back to the mid-1800s. Through water use board agreements all Ruby Reservoir water users have agreed to a total of 20% in water usage cuts this year, said Wood, but “It’s gotten down to where people with the better water rights ultimately get the water.”

Water users have also voluntarily agreed to a 15% cut in their stored water which is delivered through canals coming from the reservoir.

As water levels drop, Ruby River recreationalists may question how ranches can keep pulling from the waterway, but Wood thinks it’s important to point out the river wouldn’t be what it is now without the dam and its agricultural origins.

“The fish and recreation are important, but just as important is those ranchers putting the water out on the ground,” said Wood, explaining that the solution is not as simple as cutting off water users and putting the water down the river. The lower end of the Ruby depends on return flow, “And the only way to do that is by irrigating. That’s what keeps us going through the winter, what keeps the lower end of the river cool during these hot months.”

There have been a few times where the Ruby’s flow has dropped below minimum flow requirements, but Wood said overall water users have kept up their end of the bargain.

“Before there was a reservoir, and before people started irrigating from it, the river would dry up every year,” said Wood. “The only reason the valley is as green as it is, the only reason the fishery is as good as it is year-round, is because of ranchers irrigating.”

The widespread drought’s trickle-down effect is being experienced in many ways, including the cost of hay. With no rain, dryland hay is nearly nonexistent. First cutting hay production is averaging 30% of what it should be. Even if the rain returned now, second and third cuttings from irrigated fields are not feasible for most areas.

Sitz expects hay prices will rise to $400 per ton by the fall, that is, if it can be found at all. He’s fortunate to have a second cutting in some areas of his ranch, but it still won’t produce enough for his cattle’s needs.

“We have 27 center pivots, and 12 of them are sitting still,” said Sitz, “because there is no water.” Four inches of rain might get the grass to grow for grazing, he said, but it’s too little, too late for substantial hay crops.

That leads to another drought debacle: livestock food supply. Sitz, who recently spoke with the Department of Livestock, estimates that about 40% of Montana’s cattle will be sold off this year, “Just because there is no hay,” he said. “And the price of hay, for the commercial calf cow guy, is to the point where it’s almost prohibitive. People have to make a decision, do they save their cow herd and go into debt in a major way, or sell their cows?”

Conversely, the market and price for livestock is down as potential buyers throughout the west deal with the same issues, said Sitz, who expects that as calves wean and cows come off Forest Service grazing permits even more cows will go up for sale, likely bringing in much less than they’re typically worth. “The market couldn’t get any softer,” he said, though he’s confident a rebound in prices is around the bend.

Shylea Wingard, owner of Bar 88 Consulting & Livestock, has her finger on the pulse of the Madison County ranching community. She’s lived here since 1977, growing up on ranches throughout the area before getting her master’s degree in agricultural economics at Purdue and later working in agricultural consulting and teaching as an adjunct professor at Montana State University teaching farm and ranch management.

It’s the small ranchers who’ve operated long term in the business that are being hit hardest by the hay shortage, said Wingard. Every year in farming is different, she said, but this level of drought is extraordinary.

Lack of precipitation in the fall of 2020 set the scene. When a late frost damaged hay crops this May, followed by extremely high temps and continued lack of rain, a worst-case scenario played out.

“If you can’t grow a crop, as a farmer or ag producer, and you get paid once or twice a year, these types of things are devastating,” explained Wingard. “Then, when expenses like hay double or triple, it cuts into your profit margin hugely.”

As more people move to Montana, there has also been an influx in demand for hay from horse owners who can afford the $400 per ton hay, said Wingard. “So, there’s a little bit of a disconnect between the newcomers and the guy who has been in business for three or four generations, who can’t pay that much for their hay.”

In previous drought years Wingard has seen hay selling for $180 per ton. In the last three years she’s paid $120-$130 per ton for the hay she purchases for her small ranch which sustains horses, cattle and goats.

Wingard has seen ranchers liquidating their cattle herds as early as this spring due to a lack of grass for grazing. The selloff continues.

“Some of these guys have cut their herds in half already,” said Wingard, “It’s simple supply and demand. When you have a shortage of hay, compounded by a high demand from people who want horse hay, hay for their small livestock, who have outside sources of income, that’s why the price is up.”

The long-term threat, opines Wingard, is that ranchers with smaller operations will be forced to sell their herds at such a low cost they’ll eventually also have to sell their land. “It’s the family farmer that’s going to struggle,” she said. “And we have 10 or 12 of those in this valley.”

The high hay prices and plummeting cattle prices may paint a bleak scenario, but Wingard is hopeful the resilient nature of Montana ranchers will prevail. “I’ve learned that ag people are resilient, there’s always tomorrow,” she said. “Tomorrow is just one day closer to the next rain. They might have to cut their numbers, but they’re trying right now to figure out how to survive and get through to fight another day.”