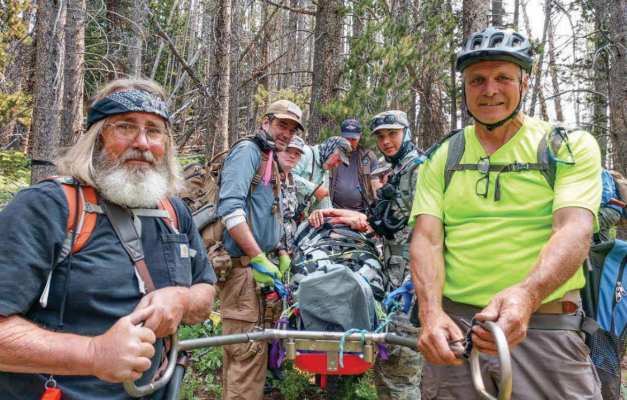 The grizzly attack-related deaths of a woman in Ovando this month and a man in West Yellowstone earlier this summer have brought the unfortunate reality of the increasingly common encounter between human and grizzly into the news as of recent. But for the members of Madison County’s search and rescue teams, the all to familiar scenario is one they expect and prepare for.

A large multi-agency, multi-casualty training exercise took place on July 10 below the Monument Ridge area of the Gravelly Mountains, a remote location well-known for its hunter-grizzly encounters and fatalities, three of which occurred just two years ago.

“We know the area has a good-sized bear population,” said Rick Hafenfeld, Ruby Valley Search and Rescue training officer. “This was really hands-on experience for something that could happen later this year in archery season.”

Search and rescue members were dispatched as first responders with coordinates, setting out in a “hasty search” with security in tow to reach three specific attack sites. These locations were deliberate – they were on or near where actual bear maulings involving bow hunters had occurred in the past.

Once the sites were located the first responders became the victims. Moulage, the art of applying mock injuries, was utilized in the training to create a realistic and urgent scene. All three mock-victims suffered from injuries and mass bleeding. One victim had an eye hanging loose while another had blood spurting from a femoral artery wound.

Then, the full teams were dispatched. Three rescue scenes were unfolding simultaneously, creating an opportunity for the four teams (one in place as a reserve) to practice the incident command system to stay on point and efficient in the rescue.

Once located, the victims were placed into a litter and packed out; in one scenario the victim had to be roped down a steep cliff. They were then transported to a landing zone where Life Flight was on scene to teach rescuers the ins and outs of loading a victim onto the helicopter while the rotor blades keep spinning.

Teamwork and communication: keys to search and rescue success.

Many agencies are involved when a search and rescue mission is initiated and underway, explained Dave Welch, president of the Ruby Valley Search and Rescue. From the initial 911 call to the sheriff’s office, to the dispatch of county-managed search and rescue, to a collaboration with the Forest Service who investigates the scene. These trainings, said Welch, help strengthen bonds between agencies.

In all search and rescue missions, training or otherwise, communication is key. Given the often remote and mountainous locations of Madison County missions, effective radio communication is crucial but often difficult to obtain. During the recent training, with help from the Civil Air Patrol, several radio repeaters were put into service.

“The biggest challenge that we have in Madison County is communications,” said Welch, who explained that the repeaters were paid for by Madison, Jefferson and Beaverhead search and rescue crews. “We have a lot of very remote areas, and a hodgepodge of geography that’s challenging.”

A CAP fixed-wing plane carried an airborne radio repeater for the scenario to extend communication lines. In addition, a ground-based repeater was also installed 9,500 feet up on Monument Ridge, opening up two unused channels that will aid future rescue efforts in the area.

This may have been one of the largest training sessions done by local search and rescue teams, but by no means was it the only. Ruby and Madison County search and rescue crews train monthly, re-creating scenarios in the snow, water and ice, sharpening skills related to first-aid, swift water rescue, rope utilization and much more.

While bear attacks remain high on the minds of local search rescue members, the crews grapple with a never-ending list of possible emergencies. When Hafenfeld was asked about some of his memorable rescues, treasure hunters came to mind.

Forrest Fenn’s treasure, once hidden somewhere in the Rocky Mountains, inspired treasure hunters to reach unusual and often dangerous locations in their search for the $1 million stash (which was purportedly found last summer in Wyoming). Three such treasure hunters ended up requiring Madison County’s search and rescue teams to respond, one of whom perished in his pursuit.

Another Fenn-related search and rescue required the use of a jet boat in the Beartrap Canyon area of the Madison River. An Arizona man was certain the spoils were hidden there. But instead of treasure the man found himself in a serious predicament, laid up in the willows along the banks of the swift-moving Madison until he was located and rescued by Welch and his crew.