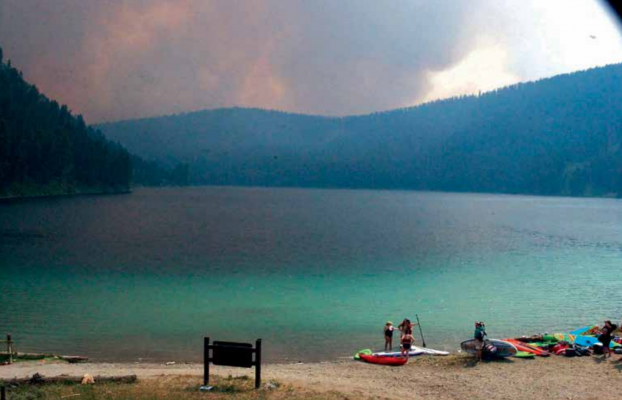 Campgrounds in the area closed, fire restrictions in place

The haze of wildfire smoke has officially descended upon Madison County. While a number of blazes are to blame for the smokey smog, the largest contributor could be the Goose Fire. It’s burning in the Hidden, Cliff and Wade Lakes area in the Beaverhead-Deerlodge National Forest, 32 miles south-southeast of Ennis near Hoodoo Pass.

According to the Northern Rockies Incident Management Team the fire started via lightning strike on July 1. Initial attack forces responded to a 250-acre rockslide area inaccessible to crews. On the afternoon of July 9 the fire moved easterly, south of Cliff Lake and into Hidden Lake Bench.

By the morning of July 10, the blaze had grown to 2,214 acres, doubling in size over 24 hours due to strong winds. The fire has expanded toward the southern end of Cliff Lake prompting evacuations and closures of the Wade Lake, Hilltop and Cliff Point campgrounds.

Dave Schmidt has owned Wade Lake Lodge for 34 years and has seen his fair share of wildfires in the area. He purchased the more than 100-year-old resort the year of the infamous Yellowstone fires burned nearly 800,000 acres.

Last year, the hunter-caused Elk Lake Fire burned in an area nearby the current blaze. The Elk Lake Fire expanded quickly in just a day, and Schmidt was asked to pack up as firefighters hunkered down at the resort in preparation to tackle the fire the next day. Mother Nature intervened that time, dropping heavy snowfall the next evening that effectively snuffed out the fire.

In 2013 the Eureka Fire put Wade Lake Resort on evacuation warning for two weeks in the case the fire moved that direction. Schmidt had his things packed up and ready to go; fortunately, that was never needed as the fire steered clear of the area.

On Tuesday Schmidt was given special permission to head back to the resort to gather the rest of the items he wanted to save in the case the flames head in that direction. “When you’ve got this much time, you might as well not lose anything if you can help it,” he said.

On July 11 Schmidt snapped some photos on Cliff Lake, watching on as white caps flashed on the waters and high winds pushed the flames towards the lake. He saw how quickly the fire could spread if the winds contributed.

Schmidt said he’s hopeful the flames won’t head towards his resort, but if the winds push the way they were on the 11th, “It could be there in an hour,” he said, noting that he has family who lived in Paradise, Calif., which was devastated by wildfires in 2018. “In one day it could burn 20 miles, if it wants to.”

Schmidt had to evacuate guests when the recent orders were issued and was told by forest service crews to expect at least a month of closures.

As of the morning of July 13 Goose Fire had progressed a mile-and-a-half southward since the day prior, growing to 3,326 acres. High winds and extremely dry fuels were cited as contributors to the growth. The southwest portion of the fire is in a remote, heavily wooded area. Along the northern edge of the fire flame lengths of up to four feet were expected in the burning timbers.

According to InciWeb 180 personnel are assigned to the blaze which is expected to remain active in the northwest and south. Estimated containment date for the fire is mid-October.

To sign up for Madison County’s emergency alerts related to the Goose Fire visit https://public.coderedweb.com/CNE/en-US/BF6BD4530FB2