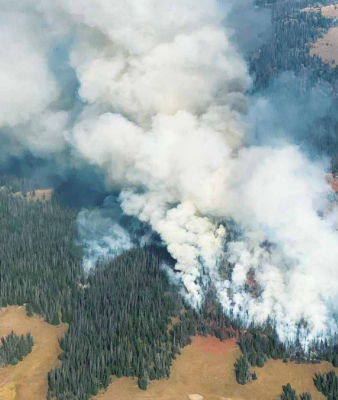 Looking at the upcoming months

Representatives from the Montana Department of Natural Resources and Conservation (DNRC), the Madison Ranger District and Madison County Emergency Management attended the Madison County Board of Commissioners’ meeting on May 11 to update the commissioners on the upcoming fire season. Multiple prescribed burns have occurred this spring in the Beaverhead-Deerlodge National Forest and Director of Emergency Management Joe Brummell told the commissioners that two structural fires have been responded to in Madison County this year.

The engine captain and fire management officer positions have been filled and he expects just a couple vacancies in the seasonal force.

“All in all, we’ve got pretty much all the holes filled,” Olson said.

Don Copple, DNRC representative, told commissioners that they had some resignations in positions that require more training and certification to fill, like engine bosses. Forest Service and DNRC fire crews can be pushed all over the nation as fires start to burn, resulting in personnel pressure. Often firefighters are sent to different places for more experience, Copple said, but as things get drier locally, they stay closer to home.

The Northern Rockies Coordination Center, an interagency focal point that is able to send incident management teams to assist with large fires, responded to many fires in California last summer, taking some of that personnel force away from other parts of the nation.

Brummell described the personnel allocation as the luck of the draw in some cases. New fires have top priority, he explained, especially when air assets are needed. Initial attacks are performed by the local area fire district.

Representatives at the commissioners’ meeting brought up the idea of starting an interagency fire investigation team that may be able to streamline an investigation process and fine responsible parties in court. Brummell said in areas that are not easy to reach and have to be accessed by helicopters or airplanes, “Those costs add up pretty darn quick.” He said it can cost $10,000 a drop when using fire retardant.

Much of the county is in a drought status now, and snowpack levels are below average.

“Usually, the water’s brown by now and really flowing, and we’re just not seeing it this year,” Copple said. “If we don’t get a lot of rain here this spring, we could be pretty busy here this summer,” he continued.

With Mother Nature involved, one often just has to wait and see what happens, Olson said.

He remembered some seasons with great snowpack and moisture that were followed by dry and hot springs, leading to notable fire seasons. Brummell recalled fires extending into November after the fire season last summer in part due to hunters not properly attending to their campfires and urged people to be careful. He mentioned open burning may shut down soon.

“For us…having those spring rains in and (if) we get some periodic rains through the summer, it’ll make a huge difference on the fire season we’ll have this summer,” Olson said.