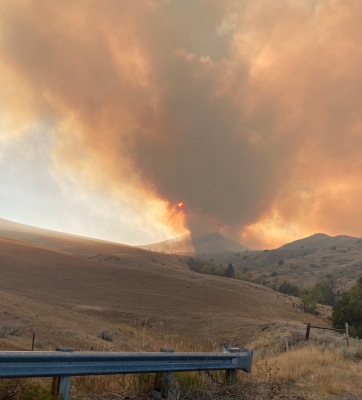 Fire Roars Outside of Harrison

The Antelope wildfire burning north of Harrison grew to nearly 2,000 acres in a day.

The fire started in the dry grass and sagebrush between United States Highway 287 and Interstate 359. It is 0% contained but 65 firefighters are tending to hot spots near the fire’s edge as of Sept. 30. Three helicopters are addressing the harsh terrain inside the fire. Both highways are commutable.

The fire was spotted late in the afternoon Sept. 29. Smoke bellowed toward a clear blue sky. By nightfall, fire crews were backburning the land around the highways to eliminate the dry fuels from propelling the fire south, toward Harrison. Highway 287 was temporarily closed to conduct the backburning but reopened around 1 a.m.

According to Madison County Fire Chief Joe Brummel, the narrow hillside-canyons in the area created chimney effects, causing the fire to rip over the hills. The fire traveled north and east at a fast rate. Fire crews are working to keep it in its current footprint, according to a Madison County press release.  Temperatures and wind are expected to remain low, but conditions are dry. Brummel said that the fire could continue to burn until weather puts it out.

No structures or livestock have been damaged nor are in danger, at this time. The Madison County Sheriff’s Office is investigating the cause of the fire, which remains unknown.