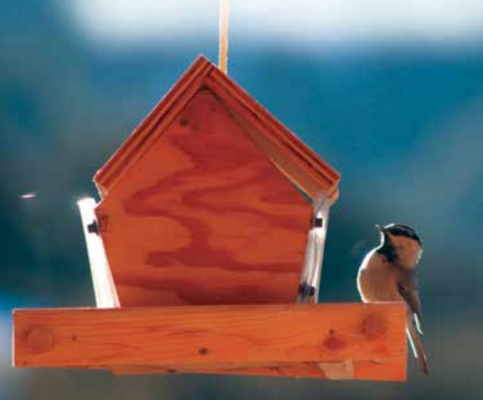 Bird lovers who’ve tuned into the news lately may have heard about the multi-state spread of salmonella in wild songbirds resulting in bird fatalities and sickness in people.

“Watching and feeding the birds is an affordable form of entertainment for folks on a fixed income,” said Liss, who resides in subsidized housing. “I love the songbirds and I’d hate to see us have some type of epidemic.”

After speaking with Liss, Miller set out to find out more about this bacterial illness that is commonly fatal for birds. MSU’s Wildlife Management Specialist Jared Beaver told her that there haven’t been any outbreaks here in Montana, and fortunately, there are steps that can be taken to keep it that way.

Salmonella spreads via bird droppings, which tend to accumulate around well-visited feeding sites. This means general care and maintenance of birdfeeders, birdbaths and the surrounding areas will go a long way in keeping Montana in the preventative stage.

Feeders and baths should be sanitized with a 10% bleach solution and rinsed with warm, soapy water. This should be done at least once a year, but with the salmonella outbreak, some experts are recommending the cleanings should be done every couple of weeks. Bird droppings and the litter of seed casings should be removed from below the feeders as well.

In addition, Miller said bird watchers should do what they do best – watch those birds. Look for signs of sickness: this includes dead birds of course, but also sick ones. Watch for signs of lethargy, fluffing of feathers and tameness. If you approach a bird and it doesn’t try to flee, chances are good it’s sick. If any telltale signs of sickness are spotted, it’s time to take down the feeders for two weeks. “If you’ve got something going on, it could spread quickly,” said Miller.

The Center for Disease Control also has a pulse on the issue, as salmonella can easily spread to humans and in can even be fatal for some. As of April 1 the current spread has 19 confirmed human infections in eight states resulting in eight hospitalizations. Many more infections are likely as most cases are not severe and don’t warrant testing. There have been no fatalities associated with the current outbreak. For more information on the public health aspect of the spread visit https://www.cdc.gov/salmonella/typhimurium-04-21/details.html.

With bird to human spread in mind, it’s advised that anyone who comes in contact with feeders and the like should wear gloves when possible, avoid touching their face and make sure to wash their hands. Pets are also susceptible, so if Spot or Mittens wander through a messy feeding area it’s a good idea to wipe their paws.

Beyond good hygiene practices, eradicating feeders and baths altogether is one way to stop the salmonella spread. It’s a measure that Idaho officials started recommending in early March. If feeders are removed, there are still other ways to attract and enjoy birds.

Miller said one alternative would be to plant native plants that the birds flock to naturally for a more spread-out food source. Miller said that historically there have been isolated reports in Montana of bird losses, likely due to salmonella, but not confirmed and certainly not as widespread as some of the issues being reported across the country. “We’re definitely in the prevention stage now,” she said.

Anyone who has noted any possible songbird salmonella issues locally can reach out to Beaver at jared.beaver@montana.edu or 406-994-3709.