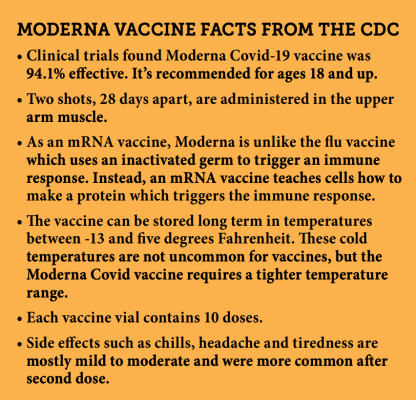 According to Madison Valley Medical Center Chief Nursing Officer Allison Treloar the goal is to have all staff who want the vaccine to be vaccinated within two weeks. MVMC has approximately 90 employees and 100 doses were received. “It’s pretty exciting and a relief,” she said.

Treloar explained that state health department regulations require healthcare workers to be vaccinated first as part of the Center for Disease Control’s Phase 1a protocol, and that the state would let healthcare centers know what demographic would be next in line to receive the vaccine. The general public would likely have access in the spring, she said.

Ruby Valley Medical Center also received the Moderna vaccine on Dec. 23. According to Emilie Sayler, RVMC public information officer, the center received almost precisely enough for the number employees who had expressed interest in being vaccinated. The doses were administered over the following week.

The vaccine arrived in Madison County six days after Governor Steve Bullock announced a second week round of the vaccine, albeit 20% less than expected, would be allocated to Montana’s rural hospitals and staff and residents of long-term care facilities.

The announcement stated that the Pfizer vaccine would be distributed to nursing homes and assisted living facilities via a federal contract with pharmacies for on-site vaccinations, while the Moderna vaccine would head to community health care centers for distribution to frontline healthcare workers.

But following Bullock’s update, much was still unknown locally regarding how the vaccine administration process would play out.

Madison County Public Health Department Nurse Melissa Brummell gave Madison County Commissioners an update on the pandemic and vaccination process at their regular meeting on Dec. 22, expressing the lack of answers for the many vaccine-related questions the department has been receiving.

The next day, the Moderna vaccine was delivered and ready to be administered.

Sayler also struggled with the last-minute nature of the situation, noting that almost nothing was known about the process a little over a week before the vaccine arrived, and that there was only a two-day notification that it would be coming.

Despite the uncertainties, and with the help of a team of professionals which was formed to make sense of it all, Sayler said, so far, so good.

Brummell is happy the vaccination process is underway. “We’re really excited to have the vaccine in Madison County, and are excited to move forward with getting people vaccinated,” she said on Dec. 28. “This will allow us to work towards prevention rather than dealing with treating people after they get sick.”

A decline leading into the holidays

Now nine months into the pandemic, there are plenty of graphs and figures to digest. During Brummell’s weekly update to the Madison County Commission on Dec. 22 she explained that with around 5,600 cases per 100,000, Madison County, with 45 active cases, has seen a decline in Covid-19 spread as of recent.

“We have slowed down as far as numbers of cases over the last few weeks, hopefully we will stay slow and steady but like I always say, we would want that to level off, that would mean no new cases,” said Brummell.

Looking at weekly case counts, Madison County experienced a spike in the middle of November. Cases decreased after that, and then a mini spike was seen around Dec. 6. Since then, locally and in general cases around the state have decreased.

“This week, so far has been fairly slow as we anticipated, said Brummell on Dec. 22, continuing, “with Christmas and holidays coming up, we are gearing up really hard for being hit really hard after that Christmas break, everybody coming back… Most likely in a couple of weeks we’ll have another pretty big spike.”

Fifty-three percent of Madison County hospital beds were full as of mid-December. Beaverhead was at 72% and Gallatin County’s beds were 70% full. Most counties throughout the state sat at about 60 to 70% full, with some 80%. “Luckily, no 100s as of yet, so everybody still has at least a few beds available during this time,” said Brummell.

Schools across Madison County have seen just a few new active cases. Despite schools being out for break, Brummell expects these active numbers to rise since the virus takes 14 days to incubate. “So, over these 14 days, they could have caught it at that school setting.”

Commissioner Dan Allhands asked Brummell about children who are testing positive, “are they sick?”

The majority of Madison County children testing positive for Covid are asymptomatic, said Brummell. Youth that did experience illness reported minor cold-like issues including runny noses, and sore throats. A few cases of loss of taste and smell were seen in high schoolers.

There was one “really sick kiddo,” said Brummell, but they did not, she believed, have to be hospitalized. “So, in Madison County none of our deaths are in the younger populations, thankfully.”