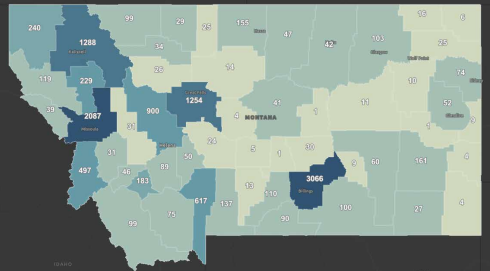 Covid in the county

F ive residents of the Tobacco Root Medical Care Center remained in isolation as of Oct. 12 in a continued outbreak directly tied to a school-related case.

While she was discouraged by the outbreak, she was quick to point out that there was some good news: there were no TRMCC staff in quarantine, and the covid-positive residents had been vaccinated and were experiencing mild symptoms which were resolving before the required 10-day isolation was complete.

“They’re on their way out of this, hopefully, but it takes a few weeks,” said Sayler, who noted sick residents are improving well, “Which is an incredible improvement over what we were looking at last year when we were having our (nursing home) outbreaks. It is only 10 days, but man, they’ve had to do it a lot, so it’s really hard to see that happening.”

Madison Valley Manor in Ennis, with all its residents and 65% of its staff vaccinated, was not in outbreak status as of Oct. 12.

Looking at the Oct. 11 state-issued numbers, over the past week county-wide confirmed covid cases were at 1,165, up 44. Active cases, 75, were down one. Fatalities in the county remain at nine. Madison County active hospitalization numbers were not available.

“We started seeing hospitals implementing things like crisis standards of care and diverting patients when we just broke 300 to 360 (hospitalizations,)” said Sayler, “So 463 is pretty significant. It shows that this is weighing pretty heavily on our hospital system in Montana.”

As Sayler’s commissioner update came to a close the group touched upon the looming staffing shortage at the MCPHD. Oct. 20 is the last day for the department’s nurse who took a job at an out-of-county hospital. Oct. 22 is the last day for the MCPHD clerk who took another clerk position in the county. The MCPHD nurse and clerk jobs are posted and the hiring process is actively underway, but until those positions are filled, Sayler becomes the sole employee in the MCPHD office.

“It’s a little daunting to think that I’ll be the only one in that office by the end of next week,” said Sayler, “But, we’ll get there.”