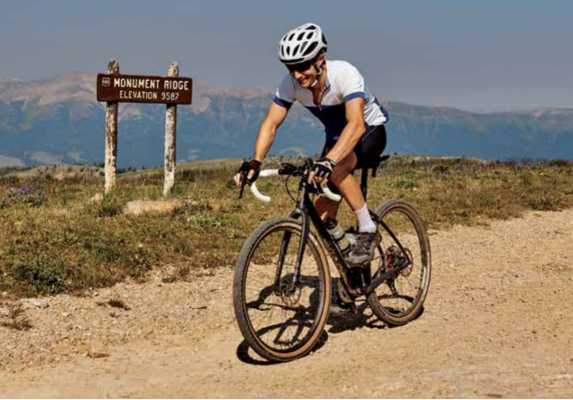 We ran (and biked and swam) Greater yellowstone adventure series

Wed, 07/29/2020 - 11:28am
By
Keely Larson
connect@madisoniannews.com
“I think what binds that together was the enormous power of community in these things. You think of athletes, especially running, as a solitary sport and it kind of is, but the beginning and the end of it, there are extraordinary powers of community force in the works and that has tremendous impact on people’s lives,” Sam Korsmoe, Greater Yellowstone Adventure Series (GYAS) director, said.

At the beginning of my conversation with Sam Korsmoe, Greater Yellowstone Adventure Series (GYAS) director, I told him I was worried I may die running the Big Sky Half Marathon. I had not done a half since 2015 and seven miles straight seemed to be the distance my body could handle consistently since then.

Korsmoe pretty much said I may indeed die, but when I get to heaven and meet God, at least I would have a good story to tell.

GYAS races are intense. The Madison Marathon boasts a start line at 9,250 feet. The Big Sky Marathon destroyed Benjamin Kassel’s new Nikes. Kassel, from North Carolina, finished first with a time of 2:55:43 and could be seen walking around Varney Bridge with his flip flops on after the 26.2 miles, letting a huge, popped blister air out. The uneven terrain gave runners’ feet and hips a pounding.

As the summer trekked on, many endurance races were canceled due to the coronavirus. Race directors felt social distancing was not feasible and that canceling made more sense.

“I kind of hung on because we’re a small race and it’s a niche race. And because we’re on National Forest [land] I have a limit of 200 anyway,” Korsmoe explained.

GYAS racers ran and biked through the Beaverhead Deerlodge National Forest. In order to use this land, Korsmoe had to get a permit from the Forest Service. In Phase One of Gov. Steve Bullock’s reopening plan, the permit was denied. In Phase Two the sentiment remained the same until Gov. Bullock retracted the mandatory 14-day quarantine for out-of-state visitors. That decision granted Korsmoe the permit and paved the way forward for the series to continue with adjustments.

Korsmoe wrote a proposal to the Madison County Public Health Department (MCPHD) outlining how each race would be capped at 50 participants, aid stations would be unmanned and only five volunteers would be needed. He mentioned the series does not typically get a ton of spectators, and that at the end of the day he can only control the racers.

MCPHD chipped in and offered suggestions such as providing hand sanitizer and masks to volunteers and keeping award ceremonies short, which he did.

“They [MCPHD] appreciated that I had a fairly detailed plan of the whole step-by-step process,” Korsmoe said.

Other adjustments included sacking shuttle buses for the Madison Marathon and altering the course. School buses were provided for Big Sky Marathoners, who were shuttled up to their starting point on the Gravelly Range Road from the Varney Bridge, but participants were required to wear masks on the buses.

“I just won’t tolerate that kind of stuff because that puts at harm the other runners and the families of other runners,” Korsmoe said. For the most part, runners abided.

Being a race director comes with static concerns. Variables like bears, elevation and heat are all things that could negatively affect a runner, and this year COVID-19 happened to be another.

Madison County Board of Commissioners, MCPHB, the Madison Valley Medical Center, Forest Service and the Sheriff ’s Office pulled together and ‘worked the problem’ rather than just ‘yelling and screaming at each other,’ Korsmoe said. The care and collaboration allowed the events to happen.

“I hope to God that this is a little bit of normal in such a crappy year,” Korsmoe said before the first weekend of races.

"The Madison duathlon is a great way to test our social distancing capabilities. . . some of us are a little better at it than others but ultimately during times of struggle, exercise is a great way to release endorphins and enhance our mental clarity and problem solving skills," Cory Hardy, duathlon athlete.

Korsmoe then added the Big Sky Marathons to complement the Madison Marathons— the Big Sky goes down and the Madison goes up. Now, marathoners were offered two races to complete in one weekend, which Korsmoe identified as a draw for many endurance runners.

This craze for races he witnessed as a race director for 13 plus years inspired Korsmoe to write a book examining the cause for the craze. In a nutshell, he found it was the desire for community.

“I think what binds that together was the enormous power of community in these things. You think of athletes, especially running, as a solitary sport and it kind of is, but the beginning and the end of it, there are extraordinary powers of community force in the works and that has tremendous impact on people’s lives,” he said.

To continue accommodating for the extreme event desire, a cycling race was added, and this year marked the first ultra, a 50-kilometer run. GYAS even absorbed the Water to Whiskey 5K.

This year’s Tour de Gravelly was met with bright, blue skies. Bikers have gear that works for them individually, and a full variety was seen on Sunday, July 26—from road racing bodysuits to button ups and long, loose shorts. As they crunched through the last section of gravel road, those waiting clapped and cheered and Korsmoe ran to his legal pad to write down names, ages, bib numbers and times for each racer.

“Madison County could probably say we’ve got one hell of a cool series here in our backyard,” Korsmoe said. The variety allows there to be something for everyone. Everyone has a story, Korsmoe said, and their own obstacles to overcome leading up to race day. “When you’re in a position to provide that to an individual, that’s pretty cool,” Korsmore said not only of himself, but of the whole county.