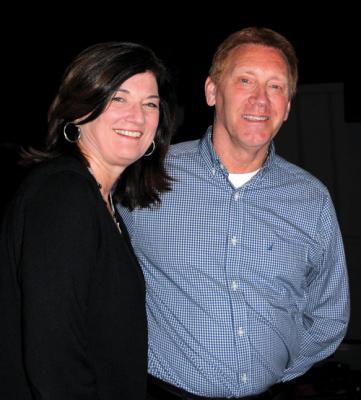 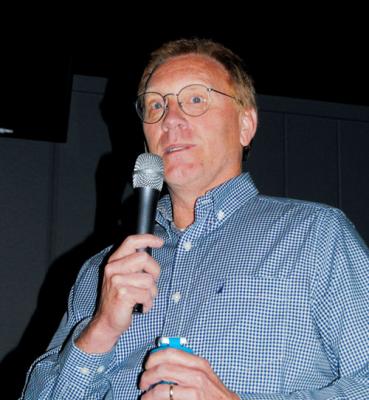 They’d come to view a film, “Walking Man: No One Does It Alone,” and listen to the subject of that film, Mark Norwine, share his family’s experience dealing with what he called a “stigmatized” subject, mental illness.

The evening kicked off with an introduction by County Commissioner Jim Hart who noted that the film and the discussion to follow would involve a “sensitive subject” and that the event was being brought to Ennis by the special Mental Health Advisory Commission and the 406 Coalition.

Hart said May – mental health month -- was the perfect time for this event because springtime in Montana is a special time. He also lauded Doris Fischer for instigating the effort.

Then, as the theatre darkened and the film began rolling, the audience received a glimpse of Mark and Lisa Norwine’s life.

Initially, photos and home movies (circa 1980s) showed what, from the outside, seemed like a normal, happy family. Wedding photos with happy smiles on everyone, flashed on the screen. Home movies of Mark, the father, playing with his three children, teaching them how to do things flickered past. First born Eric Norwine’s voice told how he idolized his father, his hero; how his father was his most significant role model. All warm and fuzzy images, homey feelings the audience could relate to.

However, slowly, gently the film told the story of how Mark’s mental illness – he suffers from obsessive compulsive disorder (OCD) generalized anxiety, depression and bi-polar disease; maladies undiagnosed until he was in his early 50s – began unraveling the family’s happiness and “normalcy.”

Mark’s life had been unfolding in a series of extreme highs and lows: His first episode surfaced during his teens, when during manic or “high” periods, the emotional pendulum associated with bi-polar disease created in him an overachiever, excelling in sports, his studies and seeming to possess boundless energy.

When the pendulum swung the other way, the lows and depression hit Mark: Early in college, he wanted to quit school and could do little more than sleep.

This up and down cycle became a rhythm more pronounced, deeper and faster as Mark aged and his brain chemistry changed.

Mark graduated from the University of Missouri with secondary and elementary education degrees, he taught for five years, but anxiety crippled his performance, made him physically sick each morning before school, so he left teaching. He next opened a silk screen T-shirt printing business because it was physically active and this kept his anxieties and depression somewhat at bay.

Still, during a manic cycle, he picked up early morning newspaper delivery routes, to keep his mind busy, working and occupied. He continued to add route after route, including delivering more papers on weekends, just to stay occupied. Also during manic cycles, he would download hundreds of pieces of music he wanted to learn how to play. He said he barely slept during these manic cycles, sometimes staying awake for days at a time.

In the film, Lisa describes not knowing how to handle Mark’s ups and downs, his anxiety. She called herself a “reluctant participant” in the journey, yet she remained the rock Mark clung to and in many respects kept the family together.

Mental illness can follow a genetic path, and as a teenager, Eric began experiencing much of the same issues his father did. Eric was bullied in school – bullying, the film pointed out, creates more anxiety and its effects last longer, according to mental health experts, than physical abuse in the home.

Eric, too, showed bi-polar and anxiety symptoms – excelling in sports and his studies, but getting sick before classes; or crashing and not being able to do much.

The family’s struggle with mental health came to a head when Mark, at age 52, descending out of a manic time where he hadn’t slept in a week, crashed. His body couldn’t take any more and he was sent to the hospital where doctors sent him home with 12 Valium pills to help him sleep. That evening, he attempted suicide, taking all 12 pills.

This episode eventually led to the diagnosis of his mental illness and eventually the control of his ups and downs, some emotional stability, thanks to medication to control his brain chemistry. He has been on this path for the last seven years, he told the audience.

As Mark began to surface from his mental illness in 2011, he wanted to do something to change the way people think about mental illness. After all, he reasoned, if people approached mental illness like any other disease – maladies that can be treated and dealt with – perhaps others could be helped.

After learning about three teen suicides in St. Clair, Missouri, Mark, under the St. Louis Communities Healing Adolescent Depression and Suicide (CHADS) banner, decided to walk the length of the Katy Trail – a 240-mile long former railroad right-of-way turned into a recreational trail that bisects the entire state, east to west – and visit schools, the Missouri senate and other locations along the way.

His mission: Share his and his family’s experiences and talk about mental illness, bullying and suicide prevention. Mark said that many see mental illness as a weakness. People who fight against heart disease or cancer are seen as strong. Not so with mental illness. He wants to change this paradigm.

Eric decided to join him on this effort, and he created a documentary – The Walking Man film – about this father’s efforts.

The film went on to show Mark visiting schools and talking to kids about mental illness, bullying and suicide prevention as he walked the trail across the state, from west to east.

The film shows Mark truly relating to the kids who approach him, helping them. One girl, for example, had been cutting herself since age 7 and she shared with Mark her experiences. He urged her to seek the appropriate help.

Mark completed his Katy Trail walk, the film was produced and is distributed widely.

Both Mark and Lisa have continued the mission to de-stigmatize mental health issues, and is what brought them to Ennis.

Following the film Tuesday evening, the audience had the opportunity to ask both Mark and Lisa about their experiences and how the community might benefit from the lessons they’ve learned.

Mark lauded the large turnout for a county of about 8,000 people and talked about how rural areas, like Madison County, due to isolation and other factors put it in the crosshairs of needing more mental health help.

“The need is great in rural areas,” he said, noting how he would visit Ennis school Wednesday, then move on to other Madison County schools to continue spreading his message.

Questions from the audience ran a broad spectrum:

Mark said Montana was the No. 1 ranking state for suicides in 2014, with about 300 suicides – compared to just 30 homicides.

Rural isolation, the state and lacking the $30 million a large city like St. Louis has available for mental health and a high degree of firearms ownership (good for hunting, but not good when suicide is contemplated) were things contributing to high suicide rates. Boys, he said, are more likely to use firearms in a suicide, while girls tend to use other methods.

One very scary statistic Mark quoted was how among a classroom of 25 students, two girls and one boy will likely attempt suicide in their lifetime, based on current rates.

Mark’s mission, he said, is to get the ball rolling and get people talking about mental health issues, so the stigma associated with this can disappear and more people can get help.

In 2015, a year after “Walking Man” and Marks Katy Trail trek was complete. Mark and Eric started Norwine Behavioral Health Advocates (NBHA), to help individuals achieve optimal mental health and well-being, and to augment their efforts to de-stigmatize mental illness. NBHA offers educational programs and services to students, caregivers, educators, and community members. Since that time, Mark has presented his information at more than 75 schools across the nation.

Other direct help can be found via:

For more information about the Norwines and Walking Man, http://walkingmanmovie.com/ontheroad/