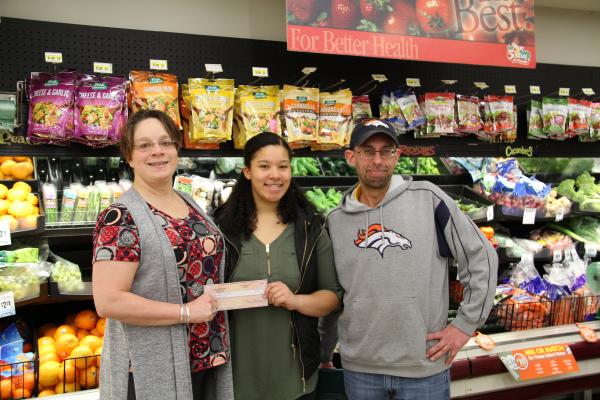 An Ennis high school student with her heart set on becoming a heart surgeon got a big boost toward her goal from a local business last Friday.

Madison Foods donated $1,195 to help cover travel expenses for Ennis High School junior Alyssa West, who is attending a medical camp at St. John's University in New York this summer. Store owner Chris Gentry and manager Blake Leavitt presented the check to West at the grocery store, an appropriate spot because West has been working in the deli there for three years.

The teenager was nominated for the camp by her science teacher, Melissa Newman.

"I'm going to New York to St. John's University, and I get to go work with actual medical students and medical staff and learn about medical careers," said West. "I get to work with the latest technology so that will be really cool. I've always wanted to be in a medical career for a long time. Being able to do this camp means so much to me. It's a really great opportunity. I hope to learn about the different surgeries they perform and stuff like that, because that's what I want to do."

"She is a go-getter," said Gentry. "I'm so excited that she's going into the medical field and has a specific goal in mind. I'm 100 percent behind her. She's going to do great. She works in the deli during summers and weekends, when she's not playing sports. Perfect attendance, hard worker, and a great attitude. She always shows up with a smile on her face."

"She started here when she was about 14 and she's a great worker," said Leavitt. "We encourage her to go and do these things. We love to have her working, but we want her to go out there. She is one of ours and we love to watch one of our own grow up and better themselves. It's incredible."

Leavitt praised West for several accomplishments. "She has worked all the way going through school," he said. "I have even more appreciation for that because, when we were kids, we had to work. And she's worked the whole time she's been in school and done all of this stuff and maintained her GPA and does all kinds of other things. It's just incredible."

"I've been with her since the beginning," said Alyssa's grandmother Linda West. "I'm a nurse myself and I've encouraged her interest in a medical career. She's just done a wonderful job through high school and her growing-up years. She stays on top of everything and she coordinates everything. She's just an amazing kid who's doing well and headed in the right direction."

Students must be selected to attend the camp, but must pay their own travel and other expenses. West still must raise another $1,000 to reach the needed $5,000 to attend the camp. Anyone interested in donating can call West at 406-580-8678.